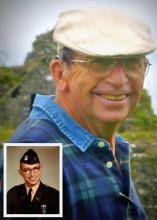 On Friday, Oct. 8, 2021, Lacy “Jack” Jackson passed away at his home at age 85.
Jack was born Lacy Marshall Jackson in 1936 in Haleyville to Benjamin Arlon Jackson and Joy Batchelor Jackson.  Jack was the first in his family to attend college, attending the University of North Alabama.  Jack was in the ROTC program at UNA and entered active duty on Nov. 12, 1958, as an armor officer.
Jack met Mary Dale Martin at a dance in Louisville, Ky., in 1965, and they were together for 56 years.  They raised a daughter, Jennifer, and a son, Jonathan.
Jack took great pride in his military career.  He completed both Ranger School and Airborne School in 1962 at Ft. Benning, Ga. and served two tours in Vietnam in 1966 and 1970.  He retired as a lieutenant colonel in 1980. His decorations include three Bronze Stars and many other commendations and citations awarded during his more than two decades of selfless service to his country.
Jack and Mary Dale settled in northern Virginia after Jack retired from the Army.  Jack worked for Computer Sciences Corp. until he and Mary Dale relocated to Decatur in 1992, working full-time with his brother Dale painting homes.
Jack and Mary Dale moved to Winchester, Va. in 2000.  They became active members of the Unitarian Universalist Church of the Shenandoah Valley, where Jack served on the board for many years.  Jack was a member of the NAACP and worked for the election board.
Jack spent his free time reading and was passionate about military history.  He enjoyed watching Alabama football with his son, Jon, and always had a house project going.  They enjoyed traveling, watching movies and going on walks together.  Jack will be remembered for his stories, his warm smile and embracing hugs.
Know at Vati by his grandchildren, Jack is survived by his wife, Mary Dale and their two children and four grandsons -  daughter Jennifer Stirgwolt, her partner John Tourek and her sons Alexander, of Richmond, Va. and Ian and his fiancee, Melissa Diaz, of Los Angeles and son, Jonathan, his wife Maria and their sons, Jake and Tyler of Arlington, Va.; brothers, Dale, of Florence and Benjamin, of Decatur and sisters, Tommie Faye Cantrell, of Muscle Shoals and Anne Carol (Little) Giorgio, of Birmingham.
Jack was preceded in death by his parents, Benjamin Arlon and Joy and his brother, Jerry Wayne Jackson Esq., of Haleyville.
A memorial service was held in Winchester this past weekend.  Direct Cremations of Stephens City, Va., assisted the family.  Jack’s ashes will be interred in Littleville Cemetery in Haleyville in the spring of 2022.