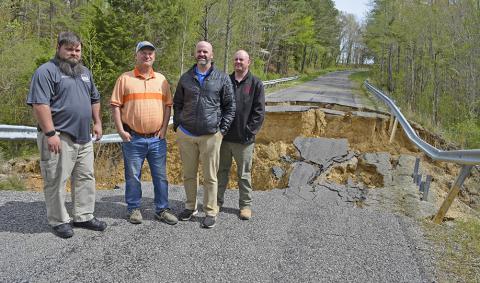 HALEYVILLE    -  The wheels of progress are turning once again, and the public should see a bridge spanning the gap where a section of County Road 54 collapsed due to aging culverts, thanks to $200,000 in Community Development Block Grant funds.
The CDBG funds, which are being provided through the Alabama Department of Economic and Community Affairs, will cover at least half of the entire project costs currently estimated at $350,000 to $400,000, according District 2 Commissioner David Cummings.
The Northwest Alabama Council  of Local Governments handled the paperwork for the ADECA funding, in order to get the CDBG funds, county officials said.
Now that the funding has been approved for the restoration project, bids for the project should start to be received by at least the summer months, added County Road Engineer James Glasgow.
Once the bids are received, they will be opened by the commission and, based on whether the bid will be accepted or rejected, a contractor would be hired by the commission to do the project, county officials said.
Typically, after a project has been awarded to contractors, it takes another 60 days before the Notice to Proceed begins, according to Glasgow.
The contractor, once the Notice to Proceed  begins, will have 90-120 working days to complete the project, not counting weekends or holidays and  pending any weather days, Glasgow explained.
Two culverts, each 15 feet in diameter and spanning 120 feet, had been in place underneath the road since at least the 1960s, officials said.
The culverts collapsed around Feb. 21, causing  a section of CR 54, 100 feet wide and 100 feet long, to collapse, creating a hole 20 feet deep.
The road was closed to through traffic beginning on Feb. 21, which includes the span of road traveling between Dime Road at Quarter Creek and Airport Road.
The commission at their regular meeting Monday, April 18, adopted a resolution application for the county competitive grant funds under urgent need for CR 54 through CDBG funds.
“It finally took us a while to come up with the pricing on this project,”  Cummings.
It also took a while to get down to see the source of the collapse due to weather conditions, Cummings added.
When a price for the project was determined, it was sent out to Winston County’s state delegation  with a commitment from ADECA reached seven hours later for $200,000, Cummings explained.
“This is not going to be the total project cost,” he reminded. “But it is a big chunk of it.
“At the end, we may have to move some gasoline tax money around, or come up with some more funding to finish this project,” said Cummings. “But we are moving through with it.”
“We’ve got to come up with the rest of it,” stressed Commission Chairman Roger Hayes. “We’re going through the procedures and the paperwork to see if we qualify for some other type of money and if we have a little bit of money to add to that.
“This kind of stuff is just not done overnight,” Hayes added. “We have to go by the state regulations. We just can’t do what we want to do.
“A lot of people think we just we don’t do it for the heck of it, but we...are abiding by our rules,” Hayes continued.
Moving the restoration project forward is a major focus right now, especially in sight of the inconvenience for motorists as well as employees and truck drivers for American Manufacturers Supply, which are having to take detours while the road is closed, officials said.
“I can’t give you a timeframe because I don’t want to mislead anyone,” Cummings stated. “It’s just going to be as soon as possible, because weather is going to be a factor in this.
“There is a lot of paperwork that has got to be done, before this project can even be bid out,” Cummings pointed out.
“I just want the community to be advised it (the project) is not off our radar. It is one of the top priorities to get this road back open, and we’re moving as quickly as we can.”

The restoration will include a concrete bridge spanning at least 40 feet, which will have a much longer lifespan than culverts, according to Glasgow. “It’s going to be pretty much encompassing that whole washout,” he said.
“We’re looking at a single span bridge,” said Glasgow. “We’ll have the bridge pylons and a backwall and a bridge over the water structure.”
Embankments at that  area will be re-enforced with rip rap, which will be used as erosion control, according to Glasgow.
Bridge pylons or supports will be placed, with a backwall installed behind that, which holds all the materials in from erosion, according to Glasgow.
“What’s  more in direct contact with the water will be a concrete wall, to hold the material in,” Glasgow continued.
“The bridge structure will open it up more than the culverts were, anyway,” he  said. The design phase of such a bridge would be roughly 50 years, he added.
“It will be  more of a permanent structure than what was in here,” Glasgow noted. “The bridge is a more long-time replacement than going back to pipe. It will be cheaper too.”
The guard rail will also be replaced as part of the project, according to county officials.
Until the project begins, the collapsed portion of road could be subject to further damage pending weather.
Already, a portion of the collapsed road has sunk further since the initial collapse occurred in February, county officials said.
“Basically, we have to check to make sure our barricades are up,” stressed Glasgow.
These Road Closure signs for through traffic have been placed at the entrances to CR 54 on both the Dime Road and Airport Road sides, county officials said.
“We have to keep a routine check to make sure  the road is closed,” Glasgow said, “because we don’t want somebody out of town come in here and the signs not be up.”

Winston County Emergency Management Director A.J. Brown stressed that, until the project is complete and road reopened, motorists should avoid the collapsed area at all costs.
“The main thing on this project at County Road 54 here is stay away,” Brown warned.
“There is no reason for anyone to be down here besides county crews and emergency responders. There is no reason for the general public to be down here,” Brown pointed out.
Brown warned that the road could still be eroding up underneath the weak sections at the collapsed section and prove hazard for the public or motorists.
“It may still be collapsing, and obviously, from the first time we have been out here, it has collapsed a little bit more. Stay away,” Brown said. “It is a major hazard.
“Just sit tight and be patient with us.”
Brown said he also periodically checks the area to make sure motorists have not come past or moved road closure signs or barricades.