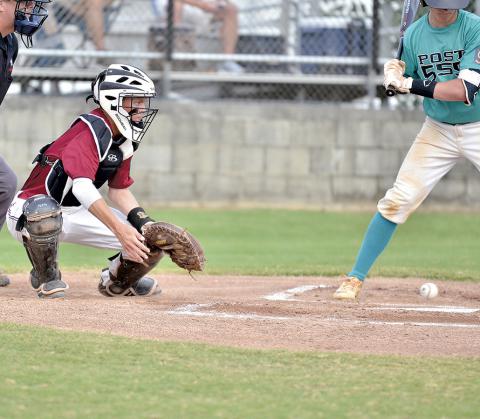 Haleyville Post 33 catcher Jordan Lasker gets ready as the ball comes in low against Shelby County. To the right, pitcher Kaleb Garrett winds up for the throw.

HALEYVILLE - Haleyville Post 33 opened up scoring in the first inning of the opening game of a double header on Monday, June 17, when Caleb Williams drew a walk, scoring one run.
Shelby County Post 555 JV pulled away for good with seven runs in the second inning, winning 9-5.  Haleyville Post 33 put up three runs in the third inning. Haleyville’s offense in the inning was led by Josh Weaver and Jordan Lasker, all knocking in runs in the inning.
Bethers was on the mound for Shelby County. He surrendered five runs on three hits over three innings, striking out one.

Kaleb Garrett toed the rubber for Haleyville. He lasted two and a third innings, allowing six hits and nine runs while striking out two. Weaver threw one and two-thirds innings in relief.
Lasker, Dylan Kutis and Camden Smith all had one hit to lead Haleyville Post 33.
Underwood led the visitors, with two hits in two at bats.

Thacker led things off on the pitcher's mound for Shelby County. He allowed five hits and three runs over four and two-thirds innings, striking out ten and walking zero. Meacham threw one-third of an inning in relief.
Williams led Haleyville Post 33 with two hits in two at bats.
Thacker went 1-for-3 at the plate to lead Shelby County Post 555 JV in hits.

Long led things off on the pitcher's mound for Haleyville Post 33. He lasted three innings, allowing three hits and six runs while striking out one. Kaleb Garrett threw two innings in relief out of the bullpen.
Long led Haleyville Post 33 with two hits in three at bats.
Lakeview Black didn't commit a single error in the field. Aric had the most chances in the field with three.