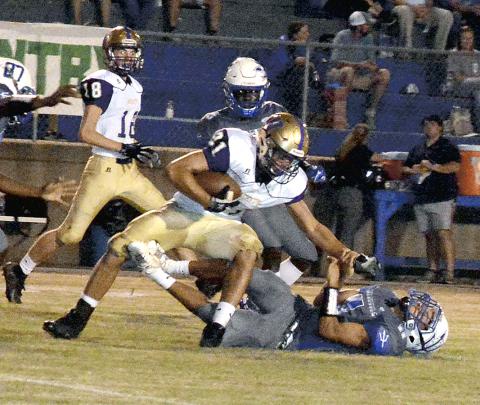 Austin Owens on the carry for the Winston County Yellow Jackets.

SULLIGENT  - Missed opportunities and turnovers told the big story Friday night, Sept. 20, as to why the Sulligent Blue Devils put the stinger to the Winston County Yellow Jackets 18-6.
The Jackets were entering the matchup 2-2 on the season, knowing they were going to face a good football team, on their opponent’s home turf.
Mistakes, including turnovers, however, spelled trouble for the Jackets, after the Blue Devils charged out of the gate and took the opening kickoff.
“We got down there in the first half and we fumbled a snap to center. You just don’t do that,” noted WCHS Head Coach Mark Mitchell.
“Our kids played hard. Those things happen at a football game, and we recovered a fumble...gave us a chance there at the end. I have to give you hats off. We played a good football team, too.
“Fumbling a football happens to everybody,” Mitchell added. “We are going to stay together, play together, win or lose together.”
The loss put the Yellow Jackets 2-3 on the season,  and 0-2 in the region.
“We just have to eliminate the little mistakes here and there...I think we’re on the right track. We’re giving it our all. We just need some breaks to fall our way instead of the other guys’ way,” Mitchell pointed out.
“Our kids believe in what they do, and I believe in our kids,” he concluded.
The Blue Devils started play with possession from their own 36 yard line. A double pass sent the ball deep to Calvin Mastin, and the Blue Devils meant business early in the game from the Jacket 12-yard-line.

After Neil Strickland edged the ball deeper to the 20, the Blue Devils were backed up on an offsides call to the Jacket 17-yard-line.
Michael Mastin toted the ball for a first down then found a path through scrimmage, and the Blue Devils were knocking on the door deep at the Jacket 1.
Strickland then got the ball and plowed up the middle to score with 9:11 in the first quarter.  Strickland’s PAT was no good, and the score was 6-0.
Austin Owens returned the ball for the Jackets  and gained another 5 despite a heavy pile up by Blue Devil defenders.
An incomplete pass to Trey Williamson and a loss at the line quickly brought up a third and 10 situation for the Jackets. A delay of game pushed them back another five, and the Jackets were starting back at their own 14-yard-line.
Ryker Morgan found space to move the ball out to midfield, and Isic Clark was quick on the carry but not enoug. Brooks Bonds’ keeper was pressed way back, so the Blue Devils took over on downs from the Jacket 40-yard-line.
The Blue Devils had a series of shorter plays when a pass sailed deep and complete to Richard Goode for a first down at the Jacket 19-yard-line..
Jacket defenders began swarming in on the plays, keeping yardage short, with the Jackets taking over on downs from their own 14-yard-line.
The Jackets started off this drive with more momentum, with Owens leading the Jackets in back-to-back first down plays taking off on a carry near their own 36, then rushing to near midfield on the second carry.
Bonds got the ball to Owens for another Jacket first down, and Jackets looked unstoppable.
An unsportsmanlike call on the Blue Devils was more yardage for the Jackets, who were now first and goal near the BD 15-yard-line.
On second and goal, a fumble was picked up by the Blue Devils deep at their own 4-yard-line.
The Blue Devils had a series of first downs of their own, putting the ball deep into Jacket territory for a first and goal situation, with only 46 seconds left until half time.
Jacket defenders helped the cause, sacking quarterback Matthew Price for a big loss in the backfield, as the first half expired.
The Jackets took the opening drive of the second half of play, but Blue Devil defenders were ready on a handoff play to Owens.
Owens, however, held on to the ball for a series of first down plays, pressing the ball deep to the Blue Devil 25-yard-line.
Owens’ next first down carry meant the Jackets were threatening deep at the Blue Devil 5-yard-line.
Blue Devils defenders stepped to the line, keeping the plays in the backfield, and a Jacket false start didn’t help matters.

Bonds was down for a loss, and a reverse play from Ownes to Trey Williams was spotted right off the bat by the Blue Devils, so the Blue Devils took over on downs from their own 18-yard-line.
The Blue Devils had crossed into opponent territory on a series of first down plays, but they didn’t count on the position of Owens, who picked off a Blue Devil pass for Jacket possession at the Blue Devil 40-yard-line.
Blue Devil defenders answered the play with heavy pressure, but the Jackets aired out the ball complete to Ryker Morgan for a big first down play near the Blue Devil 32.
Owens had sturdy footwork, pressing the ball to the opponent 14 then for a first and goal situation near the 10-yard-line.
At this point, the Jacket fans were fully involved in the football game, cheering and screaming as the situation became more intense. The Jackets were battling defenders a few plays later on a third and goal situation.

On 4th and goal, Bonds connected with Owens for the score with 7:29 left in the game.
Bonds faked the PAT, but the ball fell incomplete and the two point conversion was no good. The score was now tied 6-6.
The Blue Devils fumbled on the return, only to be recovered by the Jackets for good field position at their opponent 37.
On the very next play, Clark was down at the line, bringing a loose ball recovered by the Blue Devils at their own 39.
Jacket defenders applied the pressure, but the Blue Devils aired out the ball complete to midfield. The Blue Devils kept control, recovering their own fumble but for a loss back to their own 37.

A ball sailed to complete to Strickland, who fought off tackles to tread heavily down grid for a first down near the Jacket 36.
After Mastin set the ball for a first and goal, Strickland crossed the line from 10 yards out, with 4:09 left in the game. Lawson Spruiel was met at the line, so the two point conversion was no good, but the Blue Devils had edged ahead 12-6.
Williamson attempted a return for the Jackets, but the ball only went out to the 31-yard-line.

Later on second and three, a Jacket loose ball was scooped up by Tyrek Stephens who carried it to the uprights with 3:23 left in the game.
A fumble in the backfield meant the two point conversion was no good, setting the final score 18-6.
The Jackets had 209 yards of total offense in the game, 132 on the ground and 77 through the air, compared to Sulligent’s 263 yards of total offense: 121 on the ground and 142 passing.  Bonds was 7-for-12 with 77 yards and one touchdown.