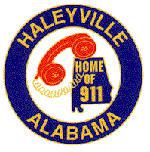 The following is the story the Alabamian ran in its Sunday, Feb. 18, 1968, edition regarding the occasion.

Rep. Rankin Fite of Hamilton-Alabama’s Speaker of the House- slowly dialed -911- in Haleyville Mayor James Whitt’s office Friday afternoon, and a solid red telephone in the nearby police station began to ring.

Congressman Tom Bevill picked up the receiver in the police station, and with his “hello,” America’s first emergency dial telephone went into service.

Standing beside Rep. Fite when he made the historic call was Mayor Whitt. Among several persons with Congressman Bevill were Public Service Commission President Eugene (Bull) Connor and B. W. Gallagher, president of the Alabama Telephone Co.

Now any citizen on the Haleyville phone exchange can dial -911- in any type emergency- be it sickness, fire, police, ambulance, etc.- and a policeman on duty will quickly summon help needed.

Eventually this emergency service will be made available to over 100 million telephone users throughout the nation. First to provide such service was the Alabama Telephone Company (an independent), member of the Continental  - the third largest independent telephone corporation in America which provides service to nearly 27,000 subscribers in Alabama.

“We are proud to be the first operating company to offer this emergency service by dialing -911- to its subscribers in Haleyville,” said Mr. Gallagher. Rep Fite, Mr. Connor, Congressman Bevill and a dozen or so others at City Hall for the ceremony offered congratulations to Mayor Whitt and other local officials for being the first to receive such service.

The overall plan to establish this service on a national basis was recommended by the President’s Commission on Law Enforcement, and the F.C.C. has also been active in urging the advantages of a single easy-to-remember number.
An important single feature of this new emergency service to citizens of Haleyville is that it will be available to all telephones, including coin phones, without requiring a coin to place the call. All a subscriber need do is lift the receiver and dial -911-.

Gallagher announced that direct dialing will be available in Haleyville in June of this year.