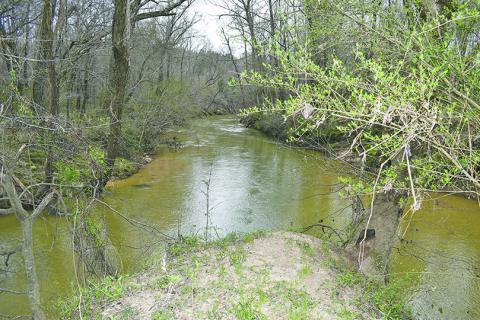 (Editor’s Note:  This is the first in a four-part series, with articles scheduled to run monthly through August.)
WINSTON COUNTY - One of the natural features of Winston County is the amount of water it has, from the “Wild and Scenic” Sipsey to Smith Lake and even all the waterfalls located in the Sipsey Wilderness and Bankhead National Forest. Many of the these smaller streams flow into the much larger creeks which, in turn, flow into the Mulberry Fork of the Black Warrior River. The Black Warrior River Basin eventually empties into the Gulf of Mexico. Four of the major creeks of Winston County are Clear Creek, Sipsey Fork, Brushy Creek and Rock Creek. This series will focus on each one.
One thing to always remember about Clear Creek: it is always cold, no matter the temperature, because of the many springs that feed it. Clear Creek gets its name from these “bold mountain springs” which flow into it. It is approximately 40 miles long beginning in the northwestern part of the county and ending in the southeastern corner.
According to the United States Geological Survey in 1958, the springs making up Clear Creek were the water supply for the City of Haleyville.
It begins in two places in Haleyville and flows south and east before emptying into the Sipsey Fork. The Black Warrior Waterdog and Flat Musk turtle, along with Rush Darter, are three endangered species located in Clear Creek.
Coordinates for the portion named Clear Creek are:
source: 34.2234325 and -87.6130797;

mouth: 34.0267719 and -87.2488989.
For the section named Right Fork Clear Creek, coordinates are:
source: 34.2523211 and -87.5725235; mouth: 34.1495466 and -87.4722403.
One of the most significant points of Clear Creek no longer exists. Clear Creek Falls disappeared from sight in 1961, as Alabama Power created a dam, which made Lewis Smith Lake. The upper falls measured 43 feet.   The lower falls measured 37 feet and is located where the current dead end of County Road 8 is.
The town surrounding the area changed names three times, the first name being Clear Creek Falls, with a post office by that name established Sept. 29, 1853.  The town changed names again to Elk on March 30, 1888, and finally to Falls City on Feb. 15, 1908.
Although the name of Clear Creek was already established by 1853, there is evidence to prove that it was given this name prior to Hancock/Winston County being created out of Walker County. In Acts of Alabama, 1826, Act 26, Section 27, while establishing election precincts in Walker County (now Winston), it mentions Clear Creek even at this early stage of the state:
“And be it further enacted, that an additional election precinct be and the same is hereby established at the house of Wyatt Cheatham, on Clear creek, in Walker county.”
However, it was not always known as Clear Creek. As early as 1823, Alabama historical maps show the name to be Grand River.  According to Jim Manasco, the Chickasaw tribe had called it the "River of the Long Leaf Pines," but the original name was Pacana (pronounced “Paw-can-naw”) which, translated by the French, means “Flat Rock River.” Jesse Livingston, on encountering Clear Creek Falls in 1812, supposedly named it Grand River.