A new building for DHR 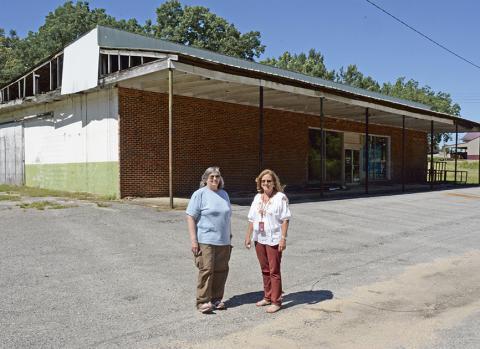 DOUBLE SPRINGS   - A new building for the Winston County Department of Human Resources will be conveniently located in the downtown area of Double Springs,  freeing DHR employees from cramped conditions at their present location while further improving the look of the town.
Groundbreaking for the new facility, which is being planned for three acres where the former Robinson and Sons Grocery store was located in the 1960s, will possibly be in August, according to DHR officials. The property for the new facility is located behind Double Springs Town Hall and the Double Springs Fire Department off Blake Drive.
Once construction begins, plans are to complete the building approximately within a year, pending weather delays, DHR officials added.
The present DHR facility, located off Highway 33 across from Hendrix Health Care, was built in 1987, recalled present Winston DHR Director Diane Watson. The structure was built by the state specifically for DHR, she said.
Watson, who has been director since 2013, has been employed with DHR since 1989, a year after the present building became occupied.
The present rock structure, has a one-way entrance and exit, with vehicles coming into the parking area on the right side.  Employees or visitors have to drive all the way around the building before parking  on the side of the entrance which does not face the highway, but a wooded area.
The biggest issue at the DHR facility is lack of space for storage as well as a lack of meeting rooms and visitation areas for children, Watson pointed out.
“That was our first initial need when I first became director in 2013,” Watson noted. “We had no where to put car seats. We have to keep car seats for children that are picked up and removed (from homes). We have no storage for anything.”
The need for storage is so great, that a storage facility has had to be placed behind the present building for baby items and donated items, Watson said.
“People donate clothing, other items, cribs, things like that.  We have no storage space for that,” she continued.