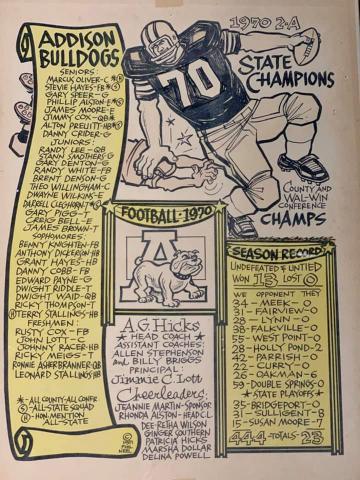 This drawing, done in 1971 by Phil Neel, is a representation of Addison High School's championship season of 1970, listing the names of all the coaches, football players and cheerleaders who were a part of making it happen.

ADDISON - In honor of the 50th anniversary of Addison High School's first official football state championship, the AHS Class of 2021 is going to honor the 1970 players, coaches and cheerleaders during the homecoming pre-game festivities Friday, Oct. 2.

The Addison Bulldogs were undefeated in 1970, shutting out almost every team they played during the season.  They defeated Susan Moore 15-7 to claim the 1970 Class 2A state title.

Everyone is encouraged to come out and recognize the 1970 football team and cheerleaders on the 50th anniversary of their triumph.