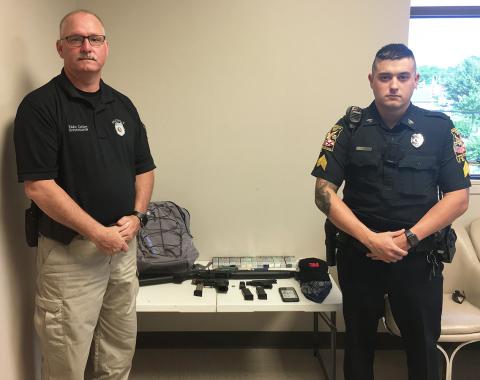 Sgt. Eddie Collins, investigator with the Haleyville Police Department, left, and Sgt. Wesley Donaldson with the items confiscated from the backpack found at the scene.

HALEYVILLE  -  A series of alleged crimes - including an armed robbery, attempted home invasion and vehicle burglaries - has been wrapped up by the Haleyville Police Department in their arrest of a single suspect.
Adrian Castro, 19, of Kidd Road, Haleyville, was taken into custody by police at Fairview Apartments in Haleyville where he was found after having allegedly broken into a vehicle there, noted HPD Investigator Sgt. Eddie Collins.
Castro has been charged with one count of robbery first degree, two counts of theft of property second degree related to the theft of two firearms, two counts of theft of property third degree for stealing credit cards from vehicles and four counts of breaking and entering of a motor vehicle, Collins said.
Several burglaries involving vehicles in the area, allegedly involving Castro, date back to at least May 19, police indicated.
However, incidents leading up to his arrest occurred on May 30 around 10 p.m. at Rosewood Lane Apartments, where Castro--wearing a bandana as a mask,  a dark hoodie and dark pants--held a Springfield nine millimeter handgun on a subject while taking the victim’s  cell phone, police noted.
The victim had come out of an apartment to find that Castro had illegally entered his vehicle, police said. He confronted Castro, who jumped out of the car and held the victim at gunpoint, police added.
After the robbery, Castro attempted to enter a nearby apartment, but the occupants closed and locked the door. He attempted to force open the door, but to no avail, noted HPD Sgt. Wesley Donaldson.
The call of a burglary in progress had  come in, but as Donaldson and Officer Jacob Taylor were responding, police were advised that the subject had entered a white Ford Taurus in the parking lot of Rosewood Lane and had been confronted by the vehicle’s owner, he said.
Police requested a K-9 unit be dispatched to the location to help seek the suspect, according to Donaldson.
The victim, who had his phone stolen during the robbery, then notified police he had used a tracker that showed his phone was in the area of Fairview Apartments across Pounders-Sims Road, Donaldson noted.
Castro had reportedly gone to Fairview Apartments, where he broke into a vehicle, ran around behind a  building and tossed his backpack, which contained stolen items and a firearm, to the ground after he noticed police had responded to the scene.
“When we went to the Fairview parking lot, we noticed there was  the dome light of a vehicle on,” said Donaldson.
The owner of the vehicle was asked if he had been in the vehicle recently, to which he responded no, police added.
Police took Castro into custody at Fairview Apartments. Taylor then accompanied the K-9 unit in an attempt to locate the stolen property along with the weapons, Donaldson said.
“We were looking for the cell phone  he had stolen and the gun,” Donaldson said.
When Collins arrived on the scene, Castro had been placed in a patrol car. At this point, a backpack was located behind one of the buildings at Fairview Apartments, police said.
Inside the backpack were the Springfield nine millimeter pistol that had been used in the robbery, as well as credit and debit cards that belonged to the owners of the vehicle at Fairview Apartments that he had got into, police said.
A Ruger .380 pistol was also found on the ground beside the backpack, Collins added.
Castro informed police that the Springfield pistol used in the robbery belonged to a family member, so it had not been stolen, according to Collins.
The Ruger .380, which was found beside the backpack,  had been reportedly stolen from a vehicle on May 29, Collins said. Castro also told police where a 12-gauge shotgun could be found at his residence, police said.
That shotgun had been stolen from avehicle on 20th Street in Haleyville on May 29, according to Collins. Also found in the backpack were 16 sets of vapes or electronic cigarettes, police said.
On May 19, police did a report of a break-in of a blue Nissan Altima on Pounders-Sims Road, where a Patagonia bag that belonged to a nurse, as well as a handbag containing credit cards were stolen, Collins explained.
“He broke into five different cars and still had all the stuff with him, except the shotgun,” Collins pointed out. “He had been on a rash of car break-ins.”
Police are in the process of recovering stolen items and returning them to their rightful owners, according to Collins, adding the case remains under active investigation.
Collins stressed to the public that they need to lock their vehicle doors when leaving them unattended.
“Every one of these cars were unlocked. He didn’t break in with a tool. He opened them and went through them.
“Lock your doors,” Collins stressed. “It may save you from losing some of your stuff.”
Collins also commended patrol officers for their hard work in these and other cases.
“I want to commend our patrol guys, as they have come through in the past few weeks on multiple theft cases, have actually caught people in the act,” Collins pointed out.
“Patrol is the backbone of every department,” he added. “Without patrol, we don’t have anything.  These guys are doing a very good job. Without them, we wouldn’t have some of these cases solved.”
*When a defendant is charged with a crime, the charge is merely an accusation until or unless proven guilty in a court of law.