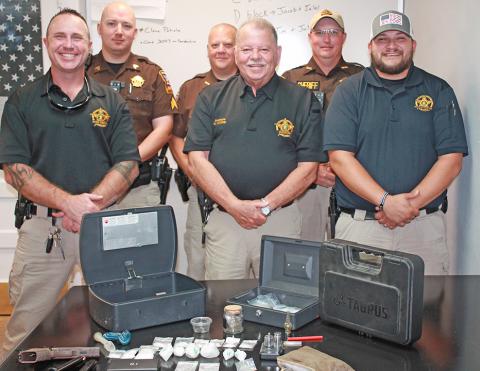 BLACK POND  -  A major drug distributor was taken off the streets after the Winston County Sheriff’s Office executed a search warrant, finding 1.4 grams of cocaine, 112 grams of methamphetamine and 2.9 grams of marijuana found.
Arrested at the scene of the raid was John Albert Kotsch, 38, of 2121 County Road 8, Double Springs, where the raid took place, sheriff’s officials said.
Kotsch has been charged with two counts of distribution of a controlled substance, one count of trafficking meth, one count of possession of a controlled substance, one count  of possession of marijuana second degree, one count of possession of drug paraphernalia and one count of failure to affix a tax stamp, according to Sheriff’s Office Chief Investigator Jacob Eward.
“Any controlled substance above eight grams, you are supposed to take down to Montgomery and get a tax stamp,” Eward noted. “You have to pay taxes on your illegal drugs.”
This charge constitutes a Class C felony, Eward pointed out.
“I’m glad after all of this hard work, we were able to get a major drug dealer off the streets,” Eward pointed out.
“One hundred and twelve grams is quite a bit of methamphetamine for one individual,” Eward added. “People think we are not watching them, but we are.  If you continue to deal drugs in Winston County, you will have to face the consequences.”
An ongoing investigation the past six months into possible drug distribution from a residence  on County Road 8,  led the sheriff’s office to the residence around 2 a.m. on Friday, July 2.
Responding for the execution of the search warrant were Chief Deputy Caleb Snoddy, Sheriff Horace Moore, deputies Chris Franks, Tim Williams, Jonathan Oliver with K-9 Bojan and Investigator Matt Roberts.
“This all started from complaints from the neighborhood of traffic coming and going all hours of the day and night at that address,” Eward stated.
The sheriff’s office established who was at the County Road 8 residence and began doing surveillance, which was used in establishing Kotsch’s patterns and movements and to identify some of his customers, he added.
After enough evidence was gathered, the sheriff’s office obtained a search warrant for the residence and property on County Road 8, investigators said.
Around 2 a.m., the search warrant was executed, resulting in the seizure of the drugs, as well as $439 believed to be proceeds from illegal drug sales, noted Eward. All of the items were found in the subject’s bedroom, he said.
Also found in the bedroom were assorted drug paraphernalia, including syringes, scales, pipes, plastic bags, a cash-counting machine and a loaded Taurus 40-caliber pistol.
All of these items were found in a safe underneath a couch/bed in the bedroom area, according to Eward.
“We hit (Kotsch) all at once. He was the main supplier,” he said. “He was the main dealer.”
Law enforcement believe that Kotsch had been selling drugs from his residence at least the past six months, Eward said.
“I am very proud of our investigative division,” added Snoddy. “We all put in a lot of hard work on this case. I am also thankful for Sheriff Moore’s support and his working along with us to make this happen.
“But the real glory belongs to God, who blesses us with the provisions we need to accomplish what I firmly believe is His will for us and for this county,”  Snoddy said.
Snoddy commended Moore on being very dedicated to stopping the flow of narcotics into Winston County.
“This was a collective effort from many people in the sheriff’s office, a real team effort, and a big win for the sheriff’s office and the citizens of Winston County,” Snoddy added.
The sheriff stated that his office is going after all drug issues, whether they are large or small.
“I am a working sheriff and out with my investigators, deputies and personnel all hours of the day and night.  By being out with them, I can see what’s going on in our communities and make better decisions to protect and serve our citizens.  I would not ask any of my officers or reserves to do anything I would not do.  I support each one of them 100 percent,”  Moore said.
Eward thanked all of the deputies for their assistance in executing the search warrant.
“They did an outstanding job,” he said. He also gave a special thanks to K-9 Officer Bojan for his continued help in drug investigations.
“He is a great asset to our agency,” Eward said.
Moore wants the public to know that he is accessible, and wants them to call him if they see any type of situation where the sheriff’s office can help.
“If you see anything going on in your community that I need to know about, call me.  It will be taken seriously and your name will be strictly confidential,”  Moore said.
Calls can be made to (205) 269-5570.
“I want you to know that Winston County has a great sheriff’s department team working for you.  I appreciate your continued support,”  Moore said.