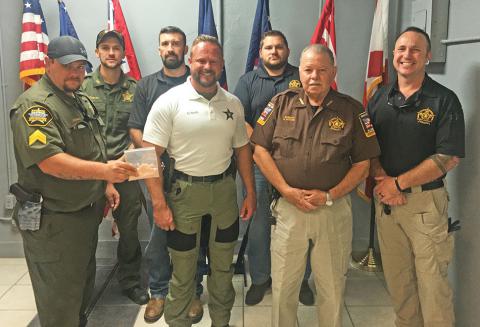 NAUVOO  -  A major drug distributor for the Nauvoo area who has clientele in Winston County has been taken off the streets, thanks to a partnership between sheriffs offices in Winston and Walker counties.
David Wayne Bonds, 56, of 3721 County Road 24, Double Springs, was charged with trafficking methamphetamine and was booked into the Winston County Jail in Double Springs, where his bond has been increased to $250,000, sheriff’s officials said. As of press time, Bonds remained incarcerated in the county jail, authorities said.
On June 28, at 9 p.m., investigators with the Winston County Sheriff’s Office, along with narcotics agents with the Walker County Sheriff’s Office, executed a search warrant on Bonds at his residence on County Road 24 after a months-long investigation.  Authorities were able to seize 32 grams of methamphetamine from Bonds, according to Winston County Investigator Jacob Eward.
Winston County Sheriff’s Office K-9 Officer Jonathan Oliver and  Bojan were called to do a search of Bonds’ residence, with Bojan reacting to the presence of narcotics, investigators said.
Bonds, however,  had fled the residence and was unable to be located for the next month, according to sheriff’s officials.
An investigation then began concerning Bonds’ possible whereabouts, leading authorities to determine where Bonds was located after several interviews were conducted with various individuals, Eward explained.
“We were able to determine Mr. Bonds had fled to Jefferson County,” he added. “We obtained an address.”
The Jefferson County Sheriff’s Office arrived at that particular address and located Bonds, authorities said.  Bonds was transported at this point to the Winston County Jail, where he was booked on the one count of trafficking meth, Eward noted.
“We had seen an influx in dope or methamphetamine in the Nauvoo area,” stated  Sgt. Josh Edwards, narcotics agent with the Walker County Sheriff’s Office.
“As we were doing our investigation in the Nauvoo area, it led back to Mr. Bonds in the Double Springs area,” Edwards added.
“We believe Mr. Bonds is...was a major supplier of the Nauvoo area, given the dope he has,” Edwards continued.
Edwards illustrated that meth possessed by Bonds had been in this case tinted or dyed pink. This is known in the drug aren, and commonly to law enforcement as Smurf Dope, where meth is dyed to weigh it down and give it flavor, according to law enforcement officials.
“Obviously, criminals do not have any jurisdictional lines. They are not bound by any jurisdiction or code of ethics,” noted Walker County Sheriff Nick Smith.
Sheriffs of both Walker and Winston counties have been communicating  for some time about issues from the  Nauvoo area spilling over into Winston County, Smith stated.
“We had talked about working together, sharing information, things of that nature when it comes about, to try to curb some of the problems both counties are seeing,” Smith added.   “This is a good example of something that started in Walker County  that bled over into Winston County.”
Winston County Sheriff Horace Moore personally thanked Sheriff Smith and his entire staff for their assistance and his office’s collaboration.  Moore also thanks the Jefferson County Sheriff’s Office for its assistance in this case.  Moore noted that this is not the first time Winston and Walker county’s sheriff’s office have worked together.
“We had a shooting incident in Winston County a couple of months ago.  The supsect ran into the woods.  Sheriff Smith dispatched his SWAT team to assist in the search for the suspect.  We searched all night.  The suspect was apprehended the following around 5:30 a.m. and taken into custody.
“That is what it is all about  - working together,”  Moore added. “By working together, great things happen.”
Winston County Sheriff’s Office Investigator Matt Roberts noted he enjoys the collaboration between both agencies.
“We’ve had numerous calls around that (defendant’s) residence of drug activity, and we’re going to keep getting the drugs off the street,” Roberts pointed out.
“We will continue to work together to make everybody’s lives better in Winston and Walker county,” Eward stated.
Chief Deputy Caleb Snoddy thanked the Walker County sheriff and deputies for many successful cases solved involving both counties.