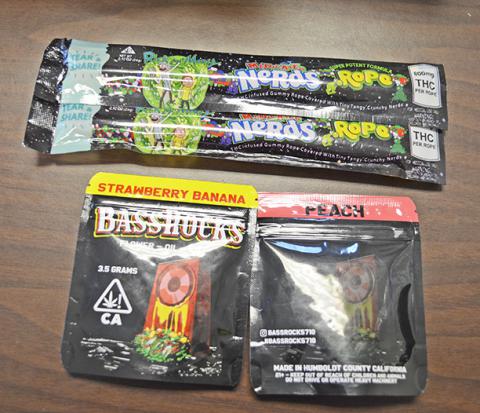 The items pictured above may look like candy, but they certainly are not. These THC-laced edibles were found in a residence in Comeens Subdivision, and Haleyville Police are concerned similar items may wind up in the hands of children.

HALEYVILLE  - Two Haleyville residents face drug trafficking and related charges after Haleyville Police discovered 15 pounds of marijuana, 60 edibles containing THC and a disassembled AR-15 assault rifle at a residence in Comeens Subdivision.
Lance Chambers, 28, and Alyssa L. Valentine, 22, both of the residence at Kenny Street where the raid took place, have each been charged with drug trafficking, possession of a controlled substance, possession of methamphetamine and possession of drug paraphernalia, noted Lt. Eddie Collins, investigator with Haleyville PD.
Chambers and Valentine were taken into custody at the scene and transported without incident to the Winston County Jail in Double Springs, Collins said.
On Oct. 1, Officers Austin Lewis and  Adam Flanagin talked with Haleyville Police Chief Rodney Lewis and Collins about obtaining a search warrant for a residence on Kenny Street based on information that a large amount of marijuana was located there, Collins explained.
The search warrant was granted, and the search warrant was executed at the residence by Collins as well as Austin Lewis, Flanagin, Nathan Whitman and Sgts. Rodney Shirley and Brian Vickery.
Police found 10 Mason jars in the kitchen cabinet, with a jar containing about three grams of meth, police said. Austin and Flanagin also noticed a zipper storage compartment at each end of a sectional sofa, Collins said.
When police looked inside, they found two large gym bags filled with vacuum-sealed packages of marijuana for a total of about 15 pounds, according to Collins.
In a separate backpack about 60 edibles disguised as candy, but which were actually THC - the illegal component found in marijuana - were found, police pointed out.
“The concern we have at the Haleyville Police Department is if a small child sees that, they may mistake it for candy and eat it,” Collins stated.
“(People) are consuming THC through all kinds of different avenues,” he continued.
Chief Lewis is currently working with members of the police department to plan a series of community meetings with different organizations, churches and the school in order to provide key information about these issues facing not only adults, but also children, police informed.
The goal of these meetings is to create an awareness of the dangers and disguising of drugs, including the THC edibles that are being disguised as innocent candy.
“A lot of people don’t know what they’re dealing with when they see it,” Collins said.
The concern is that any child finding the brightly wrapped packages resembling candy would partake of it, not realizing it was actually THC, police warned.
Also found in the residence were an unloaded AR-15 assault rifle, with a magazine of ammunition found nearby in the bedroom, according to Collins.
Police also discovered various drug paraphernalia, including scales and a vacuum sealer, police said.
The drugs and confiscated items have been transported to the Alabama Department of Forensic Science in Hoover for further analysis, police said.
“I want to commend all of our officers and patrolmen,” said Collins. “They are working diligently fighting crime and doing a very good job at it.”
If the public has any questions  or sees any of these items, or knows of any suspicious or possible drug-related activity, please contact the Haleyville Police Department at 205-486-5201.