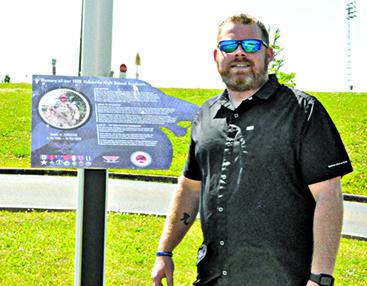 Daniel Donaldson stands beside a memorial to Mark Forester at Haleyville Middle School.

HALEYVILLE - Daniel Donaldson, 37, of Haleyville, is on a mission, and the public can get involved to help him achieve it.
Donaldson is planning to run 28 miles in honor of the late U.S. Air Force Senior Airman Mark Forester on Saturday, May 14.  The Price of Freedom race, set for May 21, will be virtual this year, after not being held since 2019 due to COVID.  While people run hopefully all over the globe in memory of Mark, Donaldson will do his run here in Haleyville, and is taking pledges for each mile he accomplishes.
Donaldson’s goal is to run each mile in less than 10 minutes, and persons making pledges are asked to pledge any dollar amount per mile if he makes the mile in less than 10 minutes.  As of press time Monday, Donaldson already has had pledged a collective total of $150 for each mile he finishes within 10 minutes.  All proceeds will go to benefit the Mark Forester Foundation, which provides scholarships to Haleyville High School students, as well as donates and supports a number of prestigious veterans and military organizations.
Donaldson said he never knew Mark personally, but he can identify with him in many ways.  Like Mark, Donaldson served in Afghanistan.
“I was actually in Afghanistan during the same time frame Mark was.  I came home in April, 2010, and he was killed in action in September, 2010,”  Donaldson said.
A Haleyville native and 1999 graduate of Haleyville High School, Sr.A Forester was fatally wounded during combat in Uruzgon Province, Afghanistan, September 29, 2010.

“With everything that has happened over the last couple of years with COVID and not being able to do the event like we normally do, I felt like we needed something to get that spark back, get the following back and make sure it’s all about Mark and the guys who didn’t make it back,”  Donaldson, who came out of the U.S. Army in 2018, as a staff sergeant, said.
Donaldson reached out to Mark’s family and was met with love and support for his idea.
“As soon as I reached out to Ray (Mark’s father) and Thad (Mark’s brother)  and told them the idea, they have been nothing but supportive of me.  Ray brought me a bunch of T-shirts and the book that Thad wrote, ‘My Brother in Arms’.  They are very supportive,”  Donaldson said.
Donaldson is also receiving a tremendous amount of support from Masonite, where he works as plant manager.  His co-workers locally have reached out to support him through pledges and in other ways, while officials at Masonite’s corporate headquarters, including the CEO, have pledged their support.  Some corporate officials are planning to come to Haleyville to support Donaldson the day of his run, with one of the officials planning to run a portion of the way with him.
While Donaldson wants all the attention and excitement from his run to go toward Mark and the Mark Forester Foundation, he is preparing himself  physically and mentally for quite a personal challenge.  Donaldson does not do long-distance running regularly, so he is learning as he trains.

“I’m a regular guy.  I have been out of the service since 2018.  I am about to try to run 28 miles at (age) 37,”  Donaldson said.
Donaldson trains both in speed and endurance.
“There are a couple of days each week where I use the treadmill at Encore and do some speed skills,”  Donaldson said.  On weekends, Donaldson goes on long-distance runs to train.
The training he is undergoing has reignited a drive within himself that Donaldson said he has not felt this strongly since his days in the Army.
“This has been important for me, personally, because of that.  I have been able to reconnect with what drove me in the military and got me through some of those hard times in Afghanistan,”  Donaldson said.
Thinking back on his days in Afghanistan helps Donaldson while he is going through his strenuous training, he says.  The American withdrawal from Afghanistan in 2021, viewed by many as a failure on the part of the U.S. government, was painful for Donaldson to watch and helped spur him into taking action to help the Mark Forester Foundation.
“The withdrawal in Afghanistan was hard for me and a lot of the guys who fought over there, witnessing how it went down and how it happened,”  Donaldson said.  “I started thinking about it (The Mark Forester Price of Freedom Race) again and started researching.  I found that the event had not been held because of the pandemic.  That had to affect the Mark Forester Foundation.  I said, ‘what can I do to help out?’”
He went to his wife, Tiffany, and told her what he was planning to do.  She was a bit incredulous at first, but has been nothing but supportive, Daniel said.

“She has been phenomenal, from taking pledges to driving the car.  She never hesitates.  She has been very supportive.  I couldn’t do this without her,”  Daniel said.
Daniel has four kids, Alecia, 15, Brody, 13, Samuel, 4 and Deacon, 2.  Each of them is supporting their dad in their own way.
“My two oldest  think I’m crazy,”  Daniel said with a laugh.  “Brody thinks it’s really cool because he loves anything to do with the military.”
Samuel may be his dad’s biggest fan, Daniel said.
“He has run with me.  He has gone to almost every long training run, riding in the car with my wife,”  Daniel said.
Pledges are open all the way through the day of the race.  Pledges can be made by calling (256) 244-1574, calling Daniel at Masonite at (205) 486-9216 or sending Daniel or his wife a message via Facebook.
Daniel will start his run at Mark’s grave at Winston Memorial Cemetery and will end at the Haleyville High School track.  Some of the Forester family plans to be there at the track.  Daniel’s goal is to be at the track between 1:30-3 p.m.

“I want everybody to be sure this is not about me.  This is for Mark and all those guys who made the ultimate sacrifice,”  Daniel said.  “I told Ray and Thad from day 1, this is all about Mark.  It’s about the foundation, and helping any way we can.”
To learn more about the Mark Forester Foundation, visit  markaforester.com.