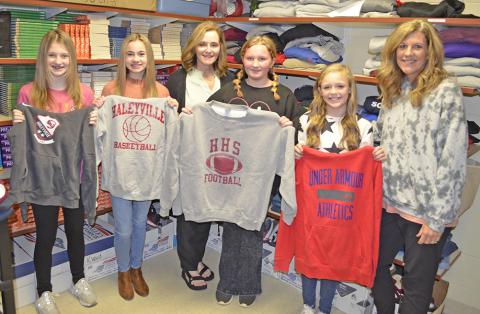 HALEYVILLE       -  Some students at Haleyville Middle School don’t realize how fortunate they really are, until  they see their peers in need of warm clothing, as temperatures begin to plummet.
As temperatures become more seasonal, meaning cooler days and colder nights, a major mission is underway at Haleyville Middle School to collect warm clothing for students in need.
The Haleyville Middle School Clothes Closet is the area of focus, as a drive is underway as the first project of the school’s first Student Government Association, to collect coats and warm clothing to be distributed based on the need.
“We don’t really have any cold weather clothes,” stressed Middle School Principal Bo Wilcoxson. “All of our cold weather stuff is gone.
“That’s why we’re putting a stress on the winter clothes, because it’s getting winter time, we really don’t have any clothes for cold weather,” Wilcoxson added.
The school has posted on their website and Facebook page that coats and warmer clothing are needed to help stock the Clothes Closet and can be brought by the public to the middle school main office, Wilcoxson stressed.
“We’re going to have some competition with it,” Wilcoxson explained. “The hall that raises the most gets 10 coins, and coins equal points.”
After each nine-week grading period, the winning grade level that donates the most warm clothing gets a special award.
The winning grade-level for the second nine weeks will be taken to the  Dixie Theatre for a movie and popcorn, Wilcoxson further explained.
“The biggest reason now is the change of weather,” said Wilcoxson. “When it gets cooler, we have some students who do not necessarily have warm clothes.”
Annually, the school collects clothing for the clothes closet, but this  year, the push is different, with this being the first time the school has had an SGA program, which wanted to get involved and help fellow students in need.
The current mission needs to be completed by the end of November, so warmer clothing can be distributed to students in need before dismissing for Christmas, school officials said.
When the deadline is reached, the needed winter clothing, based on information given by teachers, will be available to those students by visiting the clothes closet, school officials said.
“We will take them in there and let them look around,” said Wilcoxson. “If they see some things they like, they get them.”
If parents contact the school and their child is at home, the school will help those families obtain the warm clothing, according to Wilcoxson.
The middle school SGA, formed in September, was seeking to kickstart their goal of helping others with a good service project, according to SGA Secretary Andi Romine.
“Each grade gets a box,” Romine said, adding a local business donated the boxes.  “Each grade brings clothing we can give to people.”
Warmer clothing currently being collected includes leggings, shoes, thicker socks, coats and hoodies, SGA officers said.
“If we can help the elementary and high schools, we do,” Wilcoxson noted.
SGA President Gracie Wakefield noted, “It will be a great program for the people who are in need.
“I  feel like I am grateful that I have the clothes that some people may not have, so we can help the ones in need,” Wakefield added.
Since the program is just getting started, donations are a necessity, whether brought by fellow students or by the public, school officials said.
“We will take clothes at any time,” Wilcoxson stated. ”
Wilcoxson stressed the grade level competitions would go until the end of November.
Anyone bringing donations to the main office should indicate the grade level of the child or children they are wanting to help and that will be applied toward that grade level’s total, school officials said.
Boxes at the end of each grade level hallway will also be checked on a daily basis, according to SGA members.