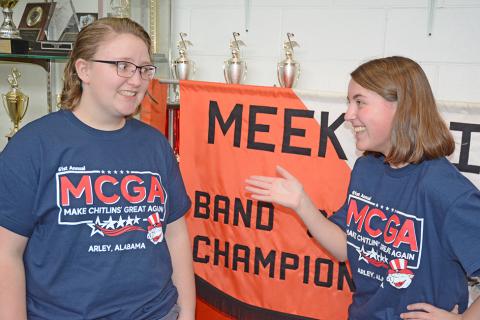 New Meek High School band student Heather Berglund, left, reacts when she is told by fellow band student Suzie Feist that a chitterling is a fried hog intestine that is actually edible.

ARLEY   - The annual chittlin' supper benefiting the Meek High School Band of Champions is less than a month away and nominations are already being accepted for the highly coveted honor of Chittlin' King and Queen, who will be announced after a vote at the supper this year.
The 61st annual Chittlin' Supper will be Friday, Feb. 28, starting 4:30 p.m. at the Meek High School cafeteria, and will feature all the luxuries of what has become known as a tradition of serving a southern fried delicacy sure to liven up any pallet.
T-shirts with their traditional catchy logo advertising the event, are already going on sale at $12 for regular sizes and $15 for sizes double X and up, noted MHS Principal Marla Murrah.
This year’s T-shirt theme has altered the campaign theme of President Donald Trump with the logo Make Chitlins Great Again.
To order T-shirts, contact MHS at 205-384-5825 or come by the school and pick up an order form, noted Band Director Kevin Dunham.
T-shirts can also be ordered by placing an email to meekbandofchampion@gmail.com.
This year, nominations for chittlin' king and queen are being accepted leading up to the event, with a committee being formed to review the nominations, Murrah said.
Nominations for chittlin' king and queen can also be emailed to meekbandofchampion@gmail.com.
The idea, Murrah said, is to nominate for these coveted honors two members of the community who have been avid supporters of Meek School and its band program through the years.
The night of the supper, votes will be cast by secret ballot. Each person who attends the supper will be given a ballot, when they enter and pay their $8 entry ticket at the main door. Ballots will be cast in a certain place at the supper, Murrah explained.
“You would have to be present within the first hour and a half in order to cast your vote,” Murrah noted.
“Why not join the political spirit?” she said. “We were wanting to have something new, something different.
“Sixty years have come and gone, and it was time to try something new. Plus, we do have some outstanding community supporters. This is a way to recognize their efforts, and keep things lighthearted and fun,” Murrah continued.
Once the votes are cast from the audience that night, a group of band students and parents will tabulate the results, which will be announced for the crowning ceremony.
If a tie vote occurs, politicians present for the supper will be consulted about how to do a tie-breaker to decide the winners, school officials said.
The chittlin' supper is being held in February due to the Republican primary elections held in March.
This means politicians will be out in full force at the Feb. 28 supper, and are encouraged to help the cause of raising funds for the MHS Band of Champions, by paying $50 for five minute political speeches that night, Murrah stated.
“We want to be a place where people can come and meet the candidates and just have a fun evening together with food, entertainment, contests, buck dancing, hog calling,” Murrah said. “All of those traditions will be firmly in place.”
Supper tickets paid at the door are $8, and will entitle those attending to a plate of deep fried hog intestines known in the south as chittlins, or grilled chicken, macaroni and cheese, potato salad, slaw and crackling corn bread or rolls.
This year, another part of the pig besides intestines is being added to the supper--barbecue. This will give participants a three way choice of meats at the supper--especially for those who may not be able to stomach the chittlins.
The event will also feature contests for hog calling, buck dancing as well as  a variety of live entertainment, including soloists and bands.