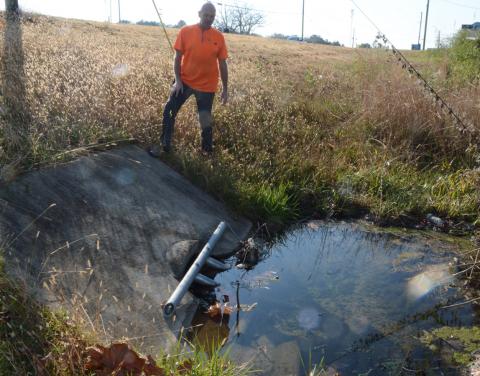 BEAR CREEK - . The water issue in the town of Bear Creek is a double edged sword, as the town is facing soaring water bills due to non-paying customers, while major water leaks are also proving costly to the town.
Town Clerk Jamie Green reported some staggering figures at the Monday, Dec. 7 town council meeting that 995 of the town’s 1,060 water customers were not paying their bills. That amount includes the current and past due customers, Green said.
Town officials estimate that 30 to 40 customers are at least one month behind in their water bills.
The town at the time of the council meeting owed a water bill of $58,175.22 from customers who were not paying their bills, Green reported.
Customers over 30 days behind in their bills amounted to $11,288.94; over 60 days is $3,545.33, over 90 days is $4,784.02.
This equals a grand total of $77,793 including current and past due customers, Green explained.
Green stressed that customers beginning with those 30 days behind can have their meters locked.
“They have gone past their time limit, and that’s a good chunk of money,” Green pointed out.
“So, starting tomorrow, we are fixing to lock some meters,” she stressed.
In just one day, water employees had locked 14 meters of customers behind on their water bills, according to Green.
“We have 13 more meters we are going to start on (this week),” Green noted as of press time Monday.
The water bills sent out to customers, Green added, contain a notice that bills are due the 20th of the month, with late fees added the 21st and water meters subject for disconnection by the 25th.
“We hate to do this right here at Christmas, but that’s a lot of money,” Green said.
Council member James Weeks added, “We’ve got to pay our bills as human beings.”
“I understand this is a holiday time, but please take care of your water bills,” stressed Mayor Rob Taylor. “It’s one of the lowest water bills that you have.
“We have got to get those delinquencies down,” Taylor added. “We want to try to keep customers’ water bills as low as possible as far as what we have to charge the customer.
“We’re not trying to be hard on anybody...We have bills to pay too, and we have got to pay our bills. If you are not paying your water bill, we are not able to pay our bills, so we have to stay on top of it,” said Taylor.
“We can’t continue on the road we are on now, in allowing people to go for a long period of time without paying their water bill, because we can’t pay our bills our way,” the mayor continued.
“We can’t borrow the money to keep our bills paid, and allow customers not to pay their bills,” Taylor pointed out.
“When you’ve got built up 90 days, as many as we’ve got now, you start cutting them off and they start paying, but it causes an uproar among people too,” pointed out Water Department Manager Ethan Stone.
“What people don’t understand this too, is we (the town) have to pay a water bill just like they do,” Stone pointed out. “If we can get our leaks down...they need to imagine how big our system is  and how much ground we cover,” he continued.
“That’s what people don’t understand, we still have to pay our water bill. Whether you pay your water bill or not, we still have to pay ours, or they will cut us off,” Stone said.

On top of the issue town officials face in needing to collect thousands of dollars in past due water bills, employees are out battling another water problem--fixing leaks that have plagued the system for some time.
“It’s just throwing money away,” stressed Mayor Taylor.  “If we can watch our payroll and watch our expenditures, we’ll make money and  get ourselves out of this hole.”
Stone noted some of the water service lines have been in the ground at least 30 years.
“We’re going back in to the same spot, but in some of these rural areas, we have a lot of farm trucks and chicken houses....Anywhere a truck or a tractor gets on it, if the line is brittle, you are looking at leaks,” Stone pointed out.
“A lot of those (older) service lines we’ve got around us, you dig up five or six feet of it and it’s been patched four times,” Stone pointed out.
“We’ll put in a new section of line, which is still not fixing the problem, but it’s trying to cover it up,” he added.
Town employees are called out to an average of two to three leaks a day, according to Stone.
The town has received assistance in pinpointing the leaks from Rural Water, which has equipment used to locate leaks, so water employees will know which ones to fix, town officials said.
So far, Rural Water has pinpointed three leaks, according to Taylor.
Currently, the town is losing five to six million gallons of water a month systemwide, he pointed out.
The worst leak the town is currently is located Highway 13 at the storm drain, where a slip joint or connection of a three inch PVC water line, had been forced open due to water pressure, causing water to flow out in a storm drain system.
“It is running down into a ditch,” Taylor said, adding that three to four million gallons a month are being lost just off that leak.
Stone added it was difficult to locate such a leak, because it was being caught up in the storm drainage system.
“We can know the approximate area where it’s at, because we can look at one storm drain and it’s dry,” Taylor noted. “The next (storm drain) down it’s wet.”
Another major leak is at the Bear Creek Housing Authority on County Highway 79 near Phillips School, Mayor Taylor said.
“It will be under that concrete parking area,” he said. “The water is seeping up through the crack, through the seam in the concrete.” This leak will be from the cast iron pipes that were installed in the 1950s, Taylor further pointed out.
This leak is not causing any problems to any housing authority residents, he added.
“I’ve been here since the 10th of November, I have been back working here, and I think I counted  we fixed about 20 to 25 leaks,” Stone pointed out.
Leaks are sometimes on the property owner’s side of the meter, and sometimes on the town’s side. Sometimes, residents are upset with the water employees claiming they did not fix their leak, Stone said.
In situations like this, town employees are not allowed to go onto private property to fix a leak but only on the town’s portion of the line  or the line that is on town owned property, employees said.
“If they have a leak (on their side of the meter), and they come to me and they are griping about their water bill being high, I am like, ‘Fix your leaks’ It’s common sense really,” Stone pointed out. “And they will let it go instead of fixing it.”
The job of fixing leaks, he added, was difficult on just two water department employees.
Therefore, water leaks as well as failure of customers to pay their bills are being figured into the town’s financial losses.
“If could knock our percentage down to half of what it is right now, it would be astronomical on our water bill,” he said.
Mayor Taylor assured the town is and will be working on fixing these leaks but requested patience from the public in the process.
“We are going to keep working. We are going to get out of this, but is going to take some time,” Taylor pointed out.
“It’s not going to get done in a month or two, probably not a year or two,” Taylor added. “But we are going to get on top of this.
“It’s not dangerous, but it’s bad,” Taylor added. “We’re digging out way out. We’re digging out way out of this hole.
“We’ll get there. It is just going to take some time. Employees just going out and doing their job every day, that is what will take care of it,” Taylor continued.
“First, you have to have employees, dedicated employees to get out there and do it,” Taylor added. “The leaks are everywhere. Just pick out one and go fix it every day.”