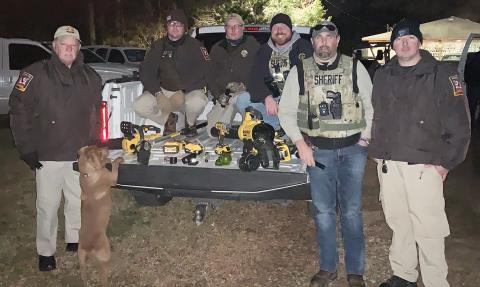 ARLEY - The report of a home break-in where thousands of dollars worth of items were stolen led the Winston County sheriff’s office to arrest two individuals, seize the stolen property and make arrangements with DHR to have a small child removed from the home due to drugs present.
Arrested were Caleb James David Alexander Gibbs, 33, of Arley, charged with possession of methamphetamine with intent to distribute, possession of drug paraphernalia and receiving stolen property first degree, according to Winston County Sheriff’s Investigator Caleb Snoddy.  Jessica Gabrielle Brasher, 27, of 60 County Road 3963, Arley, was charged with possession of meth with intent to distribute and possession of drug paraphernalia, Snoddy said.
As a result of Brasher having her 4-year-old daughter with her,  the Winston County Department of Human Resources was contacted to remove the child from the property due to narcotics being present, Snoddy explained.
Around 6 p.m. Jan. 28, the sheriff’s office received a call to respond to a residence in the Arley area, where forced entry had been made into a home and garage and thousands of dollars worth of tools, a four wheeler and side-by-side ATV were stolen--all totaling $13,000, according to Snoddy.
The victim listed Gibbs as a suspect, so Snoddy and Winston County Sheriff’s Deputy Nick Burns went to a residence at County Road 3963 where Gibbs was said to have been  residing along with his girlfriend Brasher, authorities said.
While knocking on the door in an attempt to make contact with Gibbs, Burns noticed an item lying in the carport area near the front door, Snoddy said. The item matched the description of some of the items reportedly stolen, he added.
At this time, Brasher arrived at the scene. After sheriff’s officials spoke with her, she made statements about the property, as authorities were seeking the whereabouts of Gibbs, authorities said.
Brasher also gave information about narcotics being located inside the residence, leading Snoddy to obtain and execute a search warrant on the property, he said.
During the execution of the search warrant, several of the items sheriff’s officials were seeking were found in the house, as well as eight grams of meth in a bag and several items of drug paraphernalia, such as pipes and scales, authorities said.
During the search, contact was made with Gibbs by telephone, and Winston County Sheriff’s Deputy Jonathan Oliver spoke briefly with Gibbs, who at the time was not wiling to meet or speak with law enforcement about the items that had been found at the residence, they said.
“We were given information as to who might have possession of the ATV which was taken from our victim,” Snoddy said.
Sheriff’s officials were able to recover the stolen ATV, which was brought to them by an individual who claimed not to be aware the item was stolen when he purchased it, sheriff’s officials said.
On Feb. 1, Gibbs was located in the Trimble community in Cullman County. Winston County was assisted by the Cullman County Sheriff’s Department in taking Gibbs into custody and transporting him to the Winston County Jail to face the charges against him, Snoddy said.
Also associated with this case was a phone call Snoddy received  from a separate victim in the Arley area, informing him that they were missing two kayaks, paddles and some household items, including a vacuum cleaner from their lake house, investigators said.
Having recalled seeing items at Gibbs’ residence that matched the description, Snoddy  and Burns returned to the scene and were able  to take possession of all these items, which had been reportedly stolen, they said.
Charges added to Gibbs’ list in response to this incident are receiving stolen property third degree, according to Snoddy.
“I would like to thank my investigators and deputies for another job well done,”  Winston County Sheriff Horace Moore said.