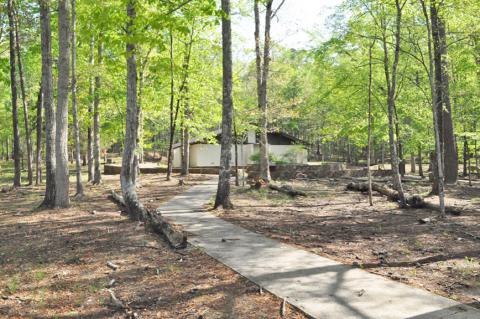 The campground at Houston Recreation Area, shown here on April 28, was one of a number of topics addressed by the Bankhead Liaison Panel at its May meeting.

DOUBLE SPRINGS - Questions from the public at the May 3 Bankhead Liaison Panel meeting revealed concerns about boat launch access on Smith Lake, the status of the Houston Recreation Area campground and the need for parking at the unofficial Caney Creek Falls trailhead, among other things.
Rutger Hyche, who was elected to the Winston County Commission for District 1 on May 24, asked if there are any plans to correct and prevent erosion at the boat ramp at Brushy Creek Bridge on County Road 63 and reopen it, considering there is no public boat launch access on Brushy Creek between Corinth and Duncan Bridge.
“We would entertain trying to deal with that,” said departing District Ranger Andy Scott. “That’s a complicated situation.” He explained that USFS engineers examined the area several years ago and found “a list of issues” that would have to be addressed. “The partners involved weren’t interested in meeting those engineering issues,” he said, adding that the USFS would like to either do “something for the public” on the site or stop the erosion and return the area to its natural state—after a discussion about which option is most appropriate for the area.
“The site you’re talking about needs work,” Scott said. “What kind of work would be discussion for a collaborative project to determine what to do or who’s going to do it, the whole nine yards, but it shouldn’t be in the current condition it’s in, which is horrible. Either turn it into flattened musk turtle habitat—and that would reduce access—or do something better for the public. Either one would be a better option than what it currently is. But it’s a large project.”
Nicole Jones Wadsworth asked if a lack of funding is preventing such a project from going forward. Scott said no, adding that the first issue would be deciding what to do at the site and the second would be getting all parties involved to agree with the plan. “When it was discussed at one point in time, all the partners involved were not comfortable with all the requirements, so then the Forest Service couldn’t move forward with it,” Scott reiterated. “If there was a change in either the requirements or the partners’ interest in meeting those requirements, then it could be revisited.”
Rep. Tim Wadsworth asked if the USFS would allow Alabama Conservation to build a boat launch across USFS-owned shoreline if Forever Wild were to purchase the adjoining inland property, pointing out that there are limited boat launches available and noting that the Alabama Bass Trail cannot include sites in Winston County because there is no boat launch location that can accommodate the necessary 200-300 parking spots.
Scott replied that the the USFS would consider such a partnership but that he could not say yes or no without first discussing it with the organizations Wadsworth named.
Wadsworth followed up with another question about USFS-owned shoreline, asking what USFS policy is on converting to private property the thin stretches of shoreline it owns and whether the USFS would ever exchange some of its shoreline in a property swap, if not sell it.
“There’s 500 miles of shoreline, and there’s little tiny tips that are in front of people’s property that (the) United States Forest Service—one—can’t mange really because they can’t get access to, but it blocks access to landowners and blocks access to boat launches and blocks access to individuals,” Wadsworth said.
“Generally speaking, land that is on the lake we do not give up in virtually any way,” Scott answered. “We just went through a fairly complicated land exchange that involved land near the water, but we specifically removed the sliver of shoreline (. . .) because we do not give up lake property. Even if we can’t do active management in terms of forest management, it still (has) conservation value for a number of important species.”
Wadsworth then asked if the USFS would swap shoreline for other shoreline. “We could entertain a shoreline for shoreline (swap) if we ended up with an increase in conservation value,” Scott said, explaining that there are three categories of conservation value, specifically for flattened musk turtle or black warrior water dog habitat, on different areas of Smith Lake, as determined by an Alabama Power survey. “That could be used as a basis for considering a swap,” he said.
Panel member James Barnacastle of Smith Lake Advocacy spoke up to say that he considers all the slivers of shoreline that are part of the national forest to be “precious nuggets along the lake” specifically because they won’t be developed. “Five hundred miles of shoreline, (and) 490 of it will be developed eventually,” he continued. “We need to preserve those precious nuggets, which the national forest is doing for us.” He noted that these areas of shoreline can be accessed by boat by the public and used for primitive camping.

Someone asked what would have to happen for the USFS to reopen the campground at Houston Recreation Area. Scott said the campground will probably never be opened to full RV camping again because its infrastructure is no longer adequate. The water and sewer lines are too out of date, he said, while the spots are too small for today’s RVs. “Even at Clear Creek, they’re starting to be too small for today’s RVs,” he said. “We have a lot of issues with that where people don’t stay on the pads.”
Scott continued, “But Houston could be converted to more of a rustic-type camping experience, and that is something that we have talked about.” He added that one factor preventing the USFS from converting the campground to rustic camping is that there is simply a limit to how many projects can be undertaken at one time.
After confirming with Cochran that concessionaires operate Corinth and Clear Creek Recreation areas, Hyche asked if the county could lease Houston and renovate it to bring it up to speed. Scott replied, “In a very general way, could the county help? Sure. Is it simple? No.” He added that the campground would still need to be converted to rustic camping. “It would be more like Brushy where you would have a single spigot at the top of the hill and that would be your water source. No electricity down through the loops but a much more rustic-type campground,” Scott explained. “Could the county help us with that? Of course they could. Exactly how? (We would need) to sit down and talk about things, and we’d have to find time to make a project for it.”