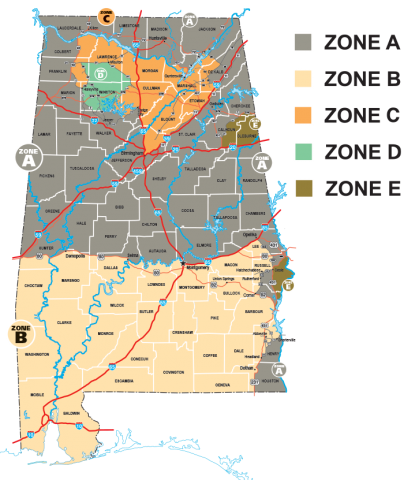 The updated zoning map for Alabama's upcoming deer hunting season. The vast majority of Winston County is in the newly-created Zone D.

WINSTON COUNTY - The 2020-2021 hunting season will bring big changes for white-tailed deer hunters in a few parts of Alabama, including Winston County.

The Alabama Department of Conservation and Natural Resources has created two new deer zones. The newly created zones D and E will allow hunters to gun hunt before and during the peak of the rut (deer breeding season) in those locations.

Zone D includes areas in Cullman, Franklin, Lawrence and Winston counties. Zone E includes areas in Barbour, Calhoun, Cleburne and Russell counties. Archery season for zones D and E will open on October 1, 2020. Gun deer season for antlered bucks will open in both zones on November 7, 2020. Antlered bucks can be taken in zones D and E through January 27, 2021. The unantlered deer harvest dates differ between zones D and E, and both zones close to unantlered deer harvest earlier in January.

Archery deer season opens in zones A, B and C on October 15, 2020. For complete deer season dates and zone information, visit www.outdooralabama.com/seasons-and-bag-limits/deer-season.

In Alabama, the peak of the rut varies throughout the state. This is due, in part, to deer restocking efforts that occurred decades ago. Deer population data collected over the last 25 years by Alabama Division of Wildlife and Freshwater Fisheries (WFF) biologists is leading to a better understanding of the state’s deer population. That data is also providing improved hunting opportunities, including the fine-tuning of the state’s deer hunting zones to allow hunters to hunt the peak of the rut statewide.

“The creation of these new deer zones highlights the hard work of our wildlife managers and the importance of harvest data provided by Alabama’s hunters,” said Chris Blankenship, Commissioner of the Alabama Department of Conservation and Natural Resources (ADCNR). “The Department strives to offer the best hunting opportunities available, and I’m happy to announce the new deer zones.”

DOVE SEASON COMES EARLY THIS YEAR
Dove season for the North Zone will open on Labor Day weekend this year, a week earlier than in previous years. Both the north and south zones feature split seasons.

This year’s North Zone dove season will open on September 5 and run through October 25 for the first segment. Hunters on opening day can hunt from noon until sunset. After opening day, hunting is allowed from one-half hour before sunrise until sunset. The second segment runs November 21-29, and the final segment is set for December 12 through January 10, 2021.

The South Zone season opens on September 12 and runs through November 1. The final two segments mirror the North Zone dates. The daily bag limit is 15 birds of either mourning doves or white-winged doves or a combination of the two.

The season is by limited quota permit only – prospective hunters must apply online. Registration is currently closed but will open this fall with an associated registration fee. The permits will be chosen by a computer-controlled random draw in October 2020. A total of 400 permits will be issued.

The season dates are split into two segments with the first running from December 4 to January 3, 2021. The second segment will be January 11-31, 2021. The daily, season and possession limit is three birds per permit. Hunters can harvest all three birds in one day if they choose.

ADCNR is once again offering hard card licenses for the 2020-2021 season. For an additional $5 fee, purchasers can select from six new designs including white-tailed deer, wild turkey, wood duck, crappie, redfish and a “We the People…” design featuring the Second Amendment.

HUNTER RESOURCES
WFF’s Adult Mentored Hunting (AMH) program was designed for those new to hunting or interested in learning how to hunt. The program provides new hunters with a one-on-one hunt under the guidance of a veteran mentor. To apply for an AMH hunt, you must be at least 19 years old, have a valid driver’s license and be new to hunting or have limited hunting experience. More information about the AMH program can be found at www.outdooralabama.com/mentored-hunting-program.

While hunting is one of the safest outdoor recreational activities, each year unnecessary hunting accidents happen and some are fatal. ADCNR reminds hunters to practice hunter safety including routine treestand maintenance and safety checks, always using a full-body safety harness when hunting from a treestand, wearing hunter orange and practicing firearm safety. For additional hunter safety tips, visit the hunter education section of outdooralabama.com.