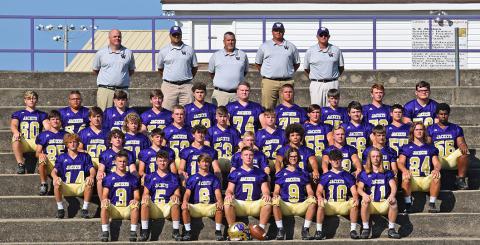 DOUBLE SPRINGS - Football has been a tradition at schools for many years. At Winston County High School, the first team began in 1920. With the exception of a handful of years in the 1920s and during World War II, scheduled games with area opponents have continued unobstructed. For the first time since 1945, WCHS has come closer than ever to not having football this season, due to the COVID-19 pandemic. However, the current plans are to continue with the Friday night sport, though players, coaches, fans and all personnel will experience the difference this year.
New measures such as social distancing, face mask requirements, limited time in the field house and temperature checks are just some of the new normal for this season. Mark Mitchell, head football coach at WCHS, discussed these changes.
“The Center For Disease Control said 15 minutes or less for being around someone will help stop the spread (of COVID-19),” he said, referring to a player being in the field house for the specified time. “They have 15 minutes to come in with a mask on, get dressed and get outside. That limits the contact. Every time we come in, we have a mask on. Inside, we already had an electronic air purifier. Every day, we spray the locker room down with a cleaning solution. Every day.”
Masks and social distancing are only the beginning of what the school is enforcing.
“The water bottle tops they use are soaked every day in laundry detergent,” Mitchell added. “When we go outside, we have a large circle huddle instead of a small one to social distance. There is no more congregating. You line up and spread out six feet apart wherever you go. When we’re in a tackling line, we have to spread out. You have to re-learn how to practice. The first day or two, we were just trying to figure out how we could practice.”
He also said each player has their own water bottle, and they have to get a refill themselves. No one is allowed to touch the water bottle except for the student it belongs to.
The process has also changed for sweat rags.
“Now we have to let everybody get one, spread out, use it, then one at a time throw it inside the bag,” he said. “You only have one time to use them. They will be washed for the next day. If we don’t do all this, we won’t have football.”
Mitchell also added temperature checks are performed every day.
“We’ll have to follow what comes through Montgomery, the health department or the Alabama High School Athletic Association,” WCHS Principal Jeff Cole said, who believes a limited amount of fans will be let into the stadium this season.
“How much, we don’t know. What that means for us and smaller schools, we don’t know. The worst case scenario I see is what we had to do at graduation, where we have it marked off.”
Each situation will be different since each school may have its own specific rules, according to Cole, who mentioned the schools will have to contact each other at the beginning of the game week to work out any conflicts, such as if the band can play. Cole also added he believes the band will be able to perform at home games.
“We might have to do a pep band,” Cole said. “I don’t even know how we would do that. There are several things we just don’t know the parts of yet.”
Concession stand and restroom procedures have not been confirmed.
“We’re just trying to follow all rules humanly possible and still play the game everybody loves,” Mitchell explained. “I’ve talked to a lot of parents, and they are on board with us doing everything we can with masks, social distancing and washing our hands to try to play football. We’re going to do it as safe as possible and not put any kid in danger. We’re going to follow every rule the AHSAA has given us and every rule (Winston County Schools) Superintendent Greg Pendley has given us. We’re following them to the T.”
WCHS this year has been realigned to region two, and according to Mitchell, four of the teams WCHS will encounter this year have made it deep into the playoffs in recent years.
“We’re going to have to play some really good football if we’re going to make it to the playoffs,” he said, “because our region is really good.”
Assistant coaches this year are Brian Wakefield, Bradly Comeens and Bruce Comeens.
As for the team itself this year, two words will define them according to Mitchell: attitude and effort.
“If they have a good attitude and give a good effort, we’ll be fine,” he said. “We’ll be able to win every game we play. If we don’t, then we won’t. We’ve had very good leadership so far in our practices, and their attitude has been great.”