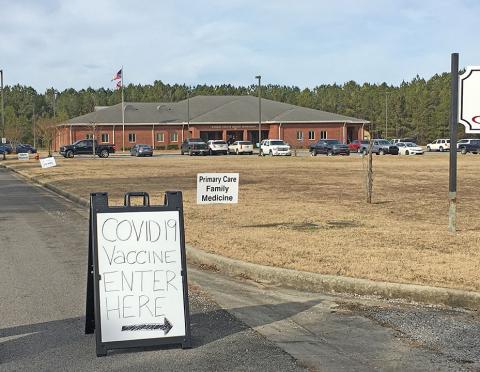 Signs at the Winston County Health Department in Double Springs direct those who have appointments to receive the COVID-19 vaccine in the direction they need to go to receive it.

WINSTON COUNTY    - Contrary to rumor, the Winston County Health Department in Double Springs continues to give COVID-19 vaccinations without interruption.
Michael Glenn, assistant administrator for the northern district of the Alabama Department of Public Health, noted that each county health department received an allotment of vaccines based on that county’s population.
“Everybody has enough vaccine to get through this week,” Glenn said at press time Monday. “We’re expecting another shipment tomorrow. I am not exactly sure how much each health department will get tomorrow, but none of our health departments in the 12 counties of the northern district are out of vaccine right now.”
The health department began administering the second round of the Moderna vaccine this week to those who were given the first round weeks ago, Glenn stated.
This week, the vaccines are being given as round two to some, while others are being administered their first dose, he pointed out.
“We can open it up for everyone to get the vaccine, but there won’t be enough vaccine to go around,” he added. “Until the supply gets better, it doesn’t matter how many sections get approved, we’re kind of handcuffed at what we have on hand.”
So far, the Winston County Health Department has been given a new vaccine allotment each week, according to Glenn.
“We hope that continues,” he said. “But we don’t have any way of knowing how the supply chain is going to continue.”
If the health department, for example, does not use all of its vaccine allotment, the remainder could be removed and given to another provider, “because we don’t want vaccine sitting in the freezer,” said Glenn.
Vaccinations at the health department, have recently expanded from two days per week to five days a week due to the high level of demand and the ample supply of vaccine available, Glenn noted.  Those vaccines are being given Monday-Friday from 8 a.m. until approximately 2:45 p.m.
“We’re trying to do appointments only, but as people in those categories show up, if they are first responders, health care providers or those over 75, we try to work them in while they are there, so they won’t have to come back,” Glenn pointed out.
“We’re allotting available slots each day at health departments based on staffing,” he added. “If a health department has allotted 100, 300 or 500 (vaccines), whatever the case may be, they may have that vaccine that has thawed out. Then, at the end of the day, there may be extra doses, so that’s where they are scrambling, trying to find people,” Glenn continued.
“I don’t know of any doses that have been wasted,” Glenn pointed out.
This past week, as persons drove their vehicles off Highway 195 toward the health department, signs were posted with arrows directing them to a tent as the first step in the vaccination process. Thad Harris, senior environmentalist  with the Winston County Health Department, was working under the tent with assistance from Chuck Rhodes, senior environmentalist with the Lauderdale County Health Department.
“We’re directing traffic. We’re taking people with appointments,” Harris said. Once the motorist pulled up to the tent, Harris and Rhodes gave them the necessary paperwork to complete before that person could receive a vaccination. The paperwork could be completed in the vehicle.
After completing the paperwork, the patient then entered the health department and went to a designated area to receive his or her vaccine, they said.
If a patient has difficulty completing the paperwork, Harris and Rhodes contact medical personnel inside the clinic who come out to assist.
Patients with mobility difficulties are assisted by medical officials bringing the vaccine to  the patient in his or her vehicle.
“We’re trying to make it as accessible as we can to the vulnerable population,” Glenn stated. “We want more vaccine to come in and more providers.  The hospitals and the health departments can’t  do it by themselves.”
The toll free number  at the Alabama Department of Public Health, 1-855-566-5333, allows callers who qualify for the vaccine to provide information in order to set up a vaccination appointment, Glenn explained. The call volume to this number has been so high that the Winston County Health Department now offers the option of calling and making a vaccination appointment directly to their office at 205-489-2101, ext. 1.
“You seem to get faster service,” Glenn remarked.
Each vial of vaccine contains 10 doses. At the end of the day, when all vaccines have been completed, people are called who made earlier appointments if any doses remain, Glenn said.
“We try to call people who can get there in 30-45 minutes,” Glenn said.

Harris confirmed that vaccines that are not being administered or administered in a way they shouldn’t will be removed from the provider doing it incorrectly and given to another provider.
“We are going to give each provider a week for each shipment they receive, and they are expected to administer the majority of that,” Harris continued.  “If not, we’ll make a determination about whether that vaccine needs to go somewhere else.”
Harris noted that Walmart pharmacies have been added to the list of vaccine providers.  However, according to Walmart’s corporate website, as of press time, Tuesday, Walmart locations in Alabama are not providing vaccinations.
Harris noted the state was awaiting a federal program to also bring in chain pharmacies to the list of providers.
“We’ll have say-so in public health about where in the state those doses go so we can make sure we get them to those parts of the state that need them the most,” Harris said.
As of the press conference, the state had 502 providers to administer the vaccine, but only half had actually received the vaccine due to the state “simply not having enough to go around.”
Harris then addressed changes from the administration of new U.S. President Joe Biden  concerning an executive order to expand priority groups as well as maximizing the manufacture of the vaccine to get it out quicker.
As of press time, the state had given 287,002  doses of the vaccine, having received 521,225 doses, accounting for 55 percent of the doses received being distributed.

“We receive an allocation based on what our population is,” he added. “The total number you see includes second doses, so as soon as one dose is given, another dose is added to our allocation, but it will not come for three weeks or four weeks.”