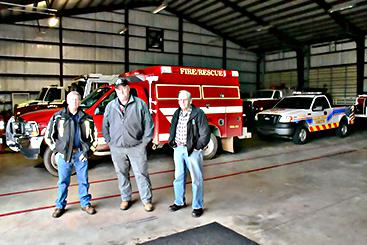 Arley Fire Chief James Rickett, Helicon Fire Chief Neil Feist and Arley Fire Department Training Officer Brian Kuntz stand in the space that has been cleared in AFD’s vehicle bay for the ambulance that they hope will soon be stationed in Arley.

On Monday, Jan. 16, the Addison Town Council voted to give an additional ambulance service permission to operate in the Town of Addison.
Addison Police Chief Brett Rodgers told the council that a certain company had a goal of stationing ambulances in both Addison and Arley. He said that Winston County E-911 had agreed to dispatch these ambulances and to make them the primary service for calls in those towns.
Rodgers spoke about the absence of paramedics on some of the ambulances currently serving the county. “Sometimes you’re getting an advanced EMT (instead). Well, if you’re having a heart attack and you get an advanced (EMT) there, you’re still no better off, because that advanced EMT cannot push drugs on you. They can’t give you nothing. If it’s a major medical, they can’t do nothing. There’s not a paramedic on their truck like there needs to be. They’re running BLS instead of ALS.” That would be Basic Life Support instead of Advanced Life Support.
He said that the unnamed company has mutual aid agreements with other ambulance services, including Cullman EMS, which would mean that if both of the ambulances it stations in Winston were on calls and another was needed, these other ambulance services could respond.
The council members and Mayor Marsha Pigg then discussed where to accommodate any ambulance service employees who might be on duty in Addison in the future. Council Member Brandon Womack suggested the former rescue squad building. Rodgers said the town could clean out an office in that building that is currently serving as storage space and make it into a nice base for the ambulance service.
Addison Fire Chief Mark Wilson said, “We’d be willing to let them use our facility, too, because it’s benefiting us and our community.”
Council Member George Palmer suggested examining and making any needed repairs to the rescue squad building.
“We’ll do some maintenance on it and the community center,” said Pigg.
“We need something bad,” said Rodgers, referring to better ambulance service. “Arley voted on it last Monday night, and they went 100 percent (for it), providing what they’re wanting is a non-subsidizing contract, which means when they come in, the town is out nothing. The town owes them nothing. The town pays them nothing. They’re here. The town just gives them permission to stay here and run calls inside.”
Womack made a motion to give permission to the ambulance service to run calls and place a service within the town limits. Palmer seconded the motion, and all council members present voted in favor. Council Members Michael Long and Timothy Cooper were not present.