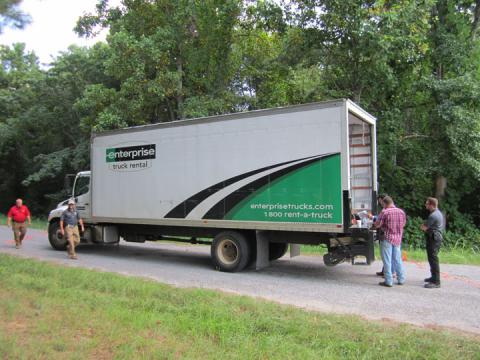 Law enforcement investigate on the scene of the shooting located County Road 3812 at CR 41 between Arley and Addison.

ARLEY - The victim of an apparent shooting Friday, Aug. 3, has died.

Lawrence McDaniel, 20, passed away Monday, Aug. 6, after suffering a gunshot would to the head Friday, Aug. 3.  McDaniel was found lying near the side of County Road 3812, according to Arley Police Chief Jerry Cummings, the first to arrive on the scene.
“It appeared to be a gunshot wound to the head,” Cummings said. “He was breathing but was not conscious.”

Air Evac medical helicopter landed in a field beside nearby CR 41, and transported McDaniel for treatment at UAB Hospital, Birmingham, Cummings said.

Law enforcement found what appeared to be a Glock handgun in the seat of a work truck labeled as Enterprise Truck Rental, in which McDaniel had reportedly been riding along with a driver and another passenger, when the shooting occurred, according to Cummings.
The truck reportedly belonged to a company in Birmingham, authorities said.
The two men, who as of presstime had not been charged in the case, were read their Miranda Rights by Cummings and were transported to the Winston County Sheriff’s Office for questioning.
Details of what led to the shooting are not being disclosed by law enforcement, pending the ongoing investigation.
Winston County Sheriff’s Investigator Caleb Snoddy confirmed law enforcement received a call around 9:10 a.m. Friday, Aug. 3, to respond to a incident north of Arley on CR 3812, off CR 41 between Arley and Addison.
Snoddy noted that two males had been questioned in connection with the shooting.
Agencies responding to the scene included Arley Police Department, Arley Fire  Department, Addison Police Department, Winston County Sheriff’s Office, Winston County District Attorney’s Office, Air Evac and Hearns Wrecker Service, which towed the truck from the scene to be impounded at the sheriff’s office in Double Springs.