County issuing warrants over past due bills 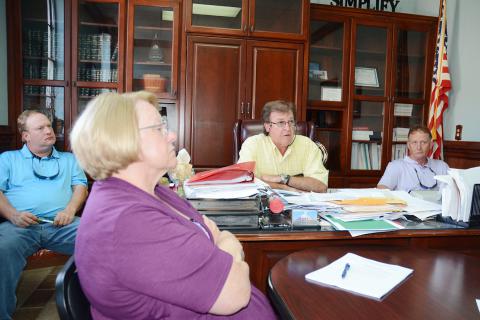 WINSTON COUNTY - $800,000 in arrears caused by residents not paying their fees for sanitation collection services has forced the Winston County Commission into taking its strongest action yet, reaching the point of legal action to get residents to pay up on past due bills.

Commission Chairman Roger Hayes spoke out at the commission’s regular meeting Monday, May 13, stating that the county has zero tolerance on residents not paying their garbage bills for services that cost only $39 a quarter, compared to counties such as Fayette, which charges $51 a quarter.

The county has been dealing with residents not paying for their garbage collection fees at least  the past two years, Hayes pointed out.

“People are not paying their bills,” Hayes pointed out. “We’re trying to work and people just need to pay their bills. It’s plain and simple.”

County officials estimate that of the county’s 8,000 sanitation customers, about 10-20 percent are not paying their bills.

The county plans to issue warrants for residents in arrears, with these residents able to sign their own bond, Hayes said.

“If they pay in full, we will drop the warrants on them,” said Hayes.

“There is no reason to take a warrant if they come and pay in full,” added Commission Attorney Hobby Manasco.

“If they don’t pay in full, then (the county) will issue a warrant, but they will call them and tell them, ‘Y’all come up here and present yourself’. The ones who don’t do it, they’ll have to go out and find them,” Manasco said.

The county at one time hired someone to go out and collect past due garbage fees, Hayes noted. “That didn’t work out,” he said. “We hired a bill collector. It’s going to hurt your credit.”

Also in the past, the commission had Cullman Co-op do their billing, Hayes added.

“The most successful cities and counties that’re in the garbage collection business  have utilities collecting for them, either water or electric  companies,” said Hayes. “We don’t have that privilege except on the east side  of the county.”

Those on the east side of the county  who use Cullman Electric Co-op have a certain percentage of their bill taken out to go toward garbage collection services, county officials explained.
“(For) the rest of the county, we don’t have any way of collecting it other than going to court,” Hayes pointed out. “That is what we’re going to do.”

“If it continues the way it is, we won’t have any option but to turn it over to another county,” Hayes pointed out. “That will be the last straw, and hopefully it doesn’t come to that.  All the people need to do is pay their garbage bill.

“My point is, there’s no reason for all of this,” said Hayes.

If residents are turned over to another company to pay their garbage arrears, that will make their bills higher, Hayes pointed out.

“We’re turning people over to collection agencies,” he stressed.

“The people out there are going to force the commission to have to make another decision about doing something, and we don’t want to do that.

“We’re here to help our citizens. We are not here to hurt them, but they have to pay their garbage bill,” Hayes said.

Another reason why the need for citizens to pay their garbage bills is urgent is because the lack of these payments means less funds going to the services in the sanitation department, such as trucks, costs at the transfer station, paying salaries, including the salary for the Assign-A-Highway Director Tom Snoddy.

The funds from the paying of garbage collection fees are earmarked for sanitation related purposes, indicated Administrative Clerk Judy Burnett.

Other counties, Hayes illustrated, can subsidize from their general fund to offset expenses in such cases.

“We don’t have that privilege,” said Hayes. “And we’re just not going to do it. We can’t. If we had the money, we couldn’t do it.

“It’s just not fair. You have some people paying and it’s not fair for the other people who are paying,” Hayes continued.

If customers will just pay their bills in full, they will avoid court as well as other related violations they could face, county officials said.

Commissioner Bobby Everett related the need to pay garbage bills to the recent county wide clean up on Saturday, April 27,  when residents worked in conjunction with local and area landfills to clean up around their properties.

“That’s just one way to keep it clean is for everyone to pitch in and do their part on paying their bill,” Everett stated.

“I do not want another agency to come in here, because we also help to limit road damage with our good departments that we have plus keeping people employed.

“We have to keep this large equipment, the cost is there,” he added. “We’re not paying on a great expense to the people. We’re doing a great job for the people, and we want the citizens of Winston County to know what we’re up against and where we’re going with this.

“I am in with the commission on making steps on covering ourselves,” Everett pointed out.

“Just pay your bill,” added Hayes. “It will be  much simpler on everybody.”

County officials also focused the public’s attention on what the law says about the garbage collection services and the strict penalties involved for failure to pay for such services, according to the 2015 Code of Alabama.

In regard to collection of solid wastes, the health department shall exercise such supervision over equipment, methodology and personnel in the management of solid wastes as may be necessary to enforce sanitary requirements, with the state and county boards of health adopting such rules and regulations.

“Any person violating any provision of this article or any rule or regulation made pursuant to this article, shall be guilty of a misdemeanor and, upon conviction, shall be fined not less than $50 nor more than $200,” the Code reads.

“And, if the violation or failure or refusal to obey or comply with such provision of this article or such rule or regulation is a continuing one, each day’s violation shall constitute a separate offense and shall be punished accordingly,” the Code also specifies.

In other words, if a fine for that person is $200, that fine, if not paid, will double each day of offense, meaning the next day’s fine would be $400, Manasco illustrated.

The Code also states that any person, firm or corporation granted an exception for this service or which fails to carry out and comply with the provisions of the proposals in the application and plan upon which an exemption was granted to them, shall also be guilty of a misdemeanor and shall be punished as provided in the section.

Those who have not been issued a certificate of exemption for the collection of garbage services, and which use the Solid Waste Disposal System of any county or municipality, who fail to pay their fee, rate or charge established by the commission, shall be guilty of a misdemeanor and shall be punished as provided in the section, the Code further states.

“We’re trying to do our job. That is what people expect us to do,” Hayes noted.

Among related business, the commission at their May 13 meeting voted to set a public hearing in order to discuss a sanitation rate increase.

Hayes said the rate increase was to offset the expenses the county is not receiving, since many residents are failing to pay for their collection service.

Recently, the commission dealt with replacing scales at the transfer station, and a cost that was supposed to be $65,000 to $70,000 turned out to be more around $100,000, according to Hayes.

“The (scales) were about 30, 35 years old,” he said. “We’ve got to have some money to pay for those scales. The scales kind of just pushed it over the edge.”

Expenses such as this would be better covered through garbage collection service, if people would just pay their bills, Hayes emphasized.

A district court docket will list people who have not paid their garbage collection fees, Manasco said.

Snoddy, director of the Assign-of-Highway program, is sending out a message that people who are behind need to get caught up on their garbage collection arrears.

“It’s very important because first of all, people who are out of work, or low income, instead of being put in jail for not paying their fines, they can work to pick up garbage on the county roads and help keep the county roads clean,” Snoddy pointed out.

This community service can be done in exchange for court costs or fees, Snoddy added.
“They can do it through labor, in helping the county stay clean,” he noted. “That helps attract people into the county, helps the county to look better.

“We need this money caught up,” Snoddy stressed. “It’s not fair for some of the people to pay and other people to use those other people who are paying...We need to keep the Assign-A-Highway program going.”

Snoddy then sent out a message for those not paying for garbage collection services.
“They need to pay their dues like everybody else does,” he said. “The success of the program depends on it.”

The garbage collection fees go toward just Snoddy’s salary as director. Other items for the program are donated, such as collection bags from People Against a Littered State, and vests donated by Alabama Beautiful as well as a grant through the Winston County Extension Service, Snoddy explained.

“It’s a very inexpensive program that does a great deal of good for the county,” Snoddy said.

Those who need to pay their bills in full, should go by the sanitation office located in the lower level of the courthouse annex in Double Springs.