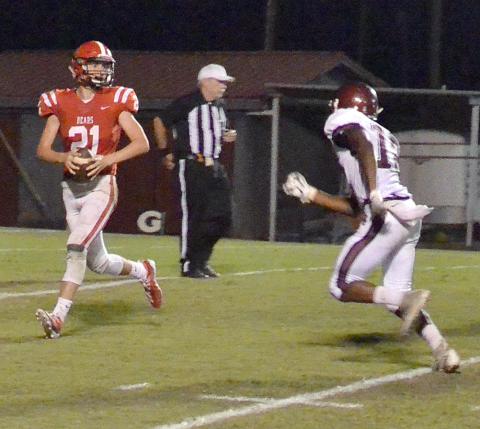 Quarterback Brandon Hill looks to throw for the Bears.

LYNN - The Lynn Bears put up a tremendous defensive effort against one of their toughest regional opponents, Pickens County, Sept. 13, but the Tornadoes were too strong in the second half, blowing the home team away 42-6.
After a scoreless first quarter, Pickens County got on the board early in the second quarter.  Starting at the 20, senior running back Ja Corian Cosby quickly sprinted for 22 yards and the first down.  Cosby had plenty of running room on the second play of the drive, too, rushing 53 yards to the 5-yard line.  The Lynn defense was impenetrable on the next two plays, but Jakaveion Byrd was able to break through on third down for the touchdown.  The PAT was no good, and the score was 6-0 with just under 10 minutes left in the half.
Turnovers became the name of the game, with Lynn fumbling and the Tornadoes recovering.  An angry Lynn defense sacked Jerry Wallace for a loss and followed that two plays later by intercepting a Tornado pass, putting Lynn in great position at the Pickens County 20.
Lynn quarterback Brandon Hill kept it for a 3-yard gain, but the visitors soon pushed the Bears back.  Going for it on fourth down, the Bears were saved by a pass interference call against Pickens County, giving Lynn an automatic first down at the Tornadoes' 12-yard line.  Micah Cagle picked up four yards, following that with another two-yard gain before being pushed back by what seemed to be the entire Pickens County defensive line.  Cagle pushed forward on third down and after the chain gang came out, it was fourth and inches.  Senior Carson Legg pushed through for the touchdown on fourth down, knotting it up 6-6 after the PAT was blocked.
Griffin Lynn was able to recover a fumble later in the first half to stop the Tornadoes and send both teams to the locker rooms with the score tied.
If the first half was a Tornado watch, the second half became a Tornado warning for Lynn, with Pickens County scoring 37 unanswered points.  Pickens County's Ta'Darien McIntosh took the kickoff all the way to the Lynn 24 to set up the first scoring drive of the half.  Cosby ran into the end zone on the next play.  Quarterback AlJaron Edwards hit Cosby for two more points, and the score was 14-6.
After a three-and-out by Lynn, the Tornadoes scored yet again.  Setting up shop at their 33, Isaiah Stevenson caught an 11-yard pass for the first down.  Two plays later, Cosby took off for the touchdown.  Dariun Doss added on two more, and the score was 22-6 with 8:20 left in the third quarter.
The Bears strove valiantly to get back in the game on the next drive.  Jacob Rivera crossed the 50 to start the drive at the 45-yard line.  Cagle gained nine yards three plays later to make it 4-and-1, then converted for the first down.  A penalty against the Tornadoes for roughing the passer placed the Bears into the red zone, but an unsportsmanlike conduct penalty against the Bears two plays later pushed them back to the 34.

McIntosh added insult to injury on the next play, intercepting a Lynn pass to set up Pickens County's next scoring drive.  From the 50, Edwards completed a short pass to Stevenson, and Cosby got his third touchdown on the night two plays later on a 44-yard run.  The score was 30-6 after the two-point conversion.
The Tornadoes would score twice more in the fourth quarter.  The first score was again courtesy of Cosby, this time on a 74-yard run.  There was no one home for the two-point try, and the score was 36-6.  Javion Belle intercepted a Bear pass for the final score of the night, running it in for the score with 5:25 left in the game.  The PAT was no good, and the final was 42-6.

Friday night is homecoming for Lynn, as the Bears prepare to take on the Brilliant Tigers. in a region match-up.  Both teams will be going for their second win for the season.  Lynn holds the record for wins between the two teams, with a 27-21 advantage.