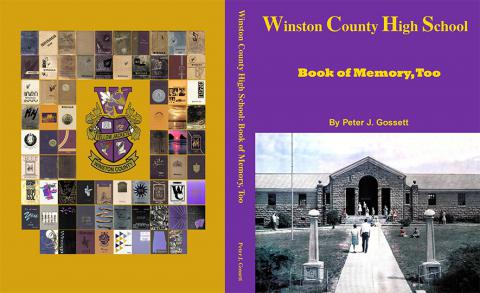 The front and back covers of P.J. Gossett’s new book about Winston County High School are nostalgic, featuring all Winsaga covers and the former school building.

DOUBLE SPRINGS - The incredible 100+ year history of Winston County High School is all together in one place for the first time, thanks to the Alabamian’s P.J. Gossett.
Gossett has written “Winston County High School:  Book of Memory, Too”, his second published book.  His first book about the history of Lynn was published in 2014.  Gossett, a 1999 graduate of WCHS, was

initially inspired to write his latest book while writing the Lynn book.
“When I did the book on Lynn in 2013/2014, going through the newspapers for it, I saw all the articles on WCHS and took photos of them. That was the original idea, but nothing came of it until 2019, when we did the “Winston: Then and Now” section for the Alabamian. I started researching and finding so much information, I decided to continue the five-year old project,” Gossett said.
“Book of Memory, Too” - at just over 500 pages long - is filled to the brim with information about WCHS, which was founded after a “literary” feud of sorts between Haleyville and Double Springs in 1907.  In the school’s 112-year history, thousands of students, faculty and staff members have filed through the doors of the four separate buildings where WCHS has been housed.  Gossett has worked painstakingly on the book for over a year, putting in hundreds of hours of work to tell the school’s story and the stories of the lives of those who helped make WCHS what it is today.
“I have been in contact with many people, as far away as England, getting information on this book. Several trips were taken to Montgomery, Decatur and Arab, as well as countless trips throughout Winston County,” Gossett said.

Gossett was very pleased to be able to use a web source for a portion of his research.
“One of the best places for the research was at newspapers.com, where I was able to locate all the principals in the newspapers of Alabama, trace them and download the articles for compiling their biographies. That alone took more than 100 hours of work. Every page of every yearbook was looked at,”  Gossett detailed.
The book contains nearly 500 photos, from the school’s beginnings right up to this century.  It also features - for the first time in one place - detailed listings of so many of the honors and traditions for WCHS.
“It contains lists of homecoming queens, Mr. and Miss Winsaga, Mr. and Miss WCHS, queen of hearts, Malcolm Blake awards and others. There are also football roster lists going back to 1920. Of course not every list is complete, but it’s better than nothing,”  Gossett said.
Gossett, who is a historian, learned many things about WCHS that he was unaware of while doing research for the book.  The feud between Haleyville and Double Springs to be the town that would have Winston County’s high school was one of them.  Another interesting fact was that the school at one time had an official flag.
“It was adopted in 1965.  It has been years since the flag was flown, as it probably burned with the school in 1971. I would like to see some future students design the flag exactly as it appeared and fly it over the school once more,”  Gossett said.
“Book of Memory, Too” also contains 100 years of football scores, Gossett said.
“It took months to compile from various sources, mainly the newspapers, but the scores begin in 1920 and continue to 2019. The data is complete enough to work out total football game statistics,” Gossett said, adding that he broke down stats for WCHS against all of its county rivals within the book, as well.
Principals and football coaches each receive chapters within the book, with detailed biographies written for almost all of them.  It was while working on the section of the book regarding WCHS’ principals through the years that Gossett came up with an idea of something to give back to his alma mater.
“Once I had all the photos of the principals, 20 in all, I began thinking of a way to display just those.  Somewhere along the way, a matte board idea came up.  I had the agriscience department at WCHS cut the matte out and successfully got it fixed without Mr. Cole (Jeff Cole, WCHS principal) knowing about it. My aunt, Judy Gossett (WCHS Class of 1972) furnished the stain and varnish; Harrison Drug was great to donate the printed photos; Kathy Pendergrass (WCHS Class of 1990) did the engraving, paid for by the Winston County Genealogical Society and European Products in Haleyville did the framing,”  P.J. said.
Once all of the photos had been framed with engraved plaques placed beneath each photo, P.J. presented the large plaque to Cole.  Former WCHS Principals Frank Horsley and Danny Springer also came for the presentation.
“It is fantastic,” Horsley said of the framed board. “I was not aware of some of those names. Some of them are a little ancient, even for me. That is a wonderful addition (to the school).”
Horsley’s principals during his time as a student were Andy Davis, Mitchell Drake and Jesse Posey from 1950 to 1962. Horsley was a teacher at WCHS when it burned in 1971. He remembers that night.
“I was out of town and was coming home to Double Springs,” he said. “You could see the flames, so I rushed on down to see exactly what was going on. When I got there, people were trying to get material out of the school building. It was already too late nearly then. I even went in a time or two and helped take out some of the typewriters. We had to enter from the elementary side and go up the stairs.”
Cole was very pleased with the plaque.

“It’s an incredible amount of hard work on somebody’s part,” Cole said. “It’s one of the gifts you can give a school where you can’t put money on what it’s worth.”
P.J. has several people he would like to thank for their help with the book.
“Ruby Gilbreath (WCHS Class of 1973) helped me quite a bit going through the yearbooks. I’m also thankful to Shelly Hess at the NWA for proofreading and Jeff Cole for putting up with my whining and giving me access to a filing cabinet of alumni banquet material,” P.J. said.
“Book of Memory, Too”, is available  for purchase at the Winston County Archives, located across from the Winston County Courthouse in Double Springs, for $30.  The archives is open Monday-Wednesday each week.  It can also be purchased through PayPal and mailed anywhere in the U.S. for $37.  To purchase online through PayPal, send $37 to winstoncounty@gmail.com and be sure to include your mailing address.
“I will be mailing them out a couple of times every week and will provide tracking numbers,”  P.J. promised.