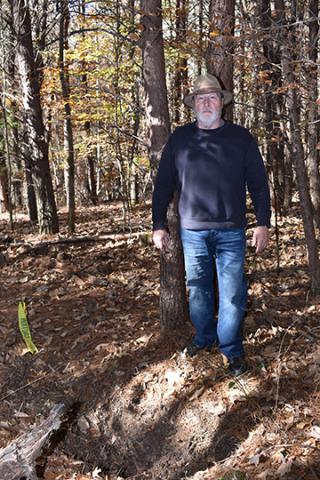 BRILLIANT - Isolated between Highway 129 and Main Street, there is a small stand of woods about one-third of a mile in length. Stuck in between the roads on a knoll, in the city limits still, is an old cemetery which has been neglected for a number of years. Only three tombstones exist in this cemetery of forgotten souls, with others containing small rocks.  Those three are Alfonza Davis, John C. Heflin and Emmet Horber. Remnants of silk flowers can be found on a few noticeable graves. One Tennessee man is looking for information and is heading up efforts in restoring the cemetery as much as possible.
James Ferrell, a retired U.S. Navy chief, of Jackson, Tenn., was driving by several weeks ago when he noticed a sign pointing the way to the Black Coal Miners Cemetery. Intrigued, he stopped to take a look. What he found instead turned into more questions than answers. The area of the cemetery was covered in trees, and the old roadbed to it was weather-beaten.
It is an interesting story how someone from Tennessee found the cemetery.
“My father-in-law lives in Hamilton, and I sit with him some through the week,” Ferrell said. “He likes to ride around and see things. I happened to see the sign. My wife was with me.” After passing the sign, the two decided to go back and have a look.
“Of course, we couldn’t find anything until we started digging,” he said. “It tugged at my heart strings, and I told my wife I need to find the history of this and find some people to contact.”
Ferrell contacted the landowner, Hal Grey III of Macon, Miss., and received permission to search the area. As Ferrell began looking, he started tagging the possible graves he saw. Some places have a couple of rocks marking the headstones and footstones, while some of the others may only have a single rock for a headstone.
Ferrell has been in search of information and has contacted the local library, mayor and even the governor’s office. He has also been in contact with Boy Scouts of America Troop 56 of Hamilton who plans to help clean off the area in pursuit of merit badges. Recently, Ferrell has contacted Ian Brown, retired anthropology professor at the University of Alabama.
“I think it’s a shame that there is a cemetery a mile up the road that is in immaculate shape and this is a forgotten area,” Ferrell said, adding he placed small flags on the two soldiers’ graves.
“I felt it was the proper thing to do. I’m a retired veteran, and that’s something I like doing, recognizing veterans. They served our country so they deserve some kind of respect and honor.”
Research on the cemetery itself has not yielded many results, even though it is a newer, 20th Century cemetery, with the latest known burial being 1950. However, histories of two of the grave tenants are seeing light of day.
The cemetery has been known by at least three names throughout its history. The death certificate and tombstone ordering information both of Horber, the last known burial, lists it as simply “Brilliant Cemetery.”
Brilliant came into existence during the coal mine boom in the area. It was incorporated in 1927 as Boston, with the name was changing to Brilliant in 1957, named after the Brilliant Coal Company. Other town names in the area are Gold Mine and Pull Tight.
As genealogical research began in earnest with the internet, the cemetery was transcribed on June 2, 2001, with a second visit March 13, 2004, by David L. Estes and Michelle Estes. The transcription was posted online at the USGenWeb. It was listed as unknown but given the name “Davis-Horber Cemetery.” Heflin’s grave was missed during the transcription process.
About 2006 or 2007, Clara Sue Miller, a resident of Brilliant, had a sign placed at the entrance to the cemetery at Highway 129. The sign stated it was the “Black Coal Miners Cemetery of Brilliant, Alabama.” Miller passed away in October.
“It’s a pretty area,” Ferrell continued. “I’m sure through all the years dirt has eroded downhill. I’m surprised I haven’t seen any kind of bones.”
Several graves have sunken far enough down to be between one and two feet deep.
On Ferrell’s second visit, he cleared the road leading to the cemetery so it can be driven to. On subsequent visits, he wishes to try to uncover more possible grave locations.
“I’m wanting to rake the leaves away and see if there is anything identifying I may have missed but try not to desecrate them any more than they already are.”
One reason Ferrell has been interested in the cemetery is the fact his family worked in mines and steel mills in the Birmingham area.
“A lot of them died in the red ore mills,” Ferrell explained. “I know three in my family who died in the 1930s and 1940s in the red ore mines around Wenona and places like that.”

Davis
Alfonza Davis was born in 1917, and died in 1946. In the 1940 census, he was living in the Coal Valley area of Walker County with an occupation of “cuppler.” His wife’s name was Elizabeth, who was 18 at the time. Their son was Alfonza Davis Jr., born the year before. No other information can be found.

Heflin
John C. Heflin was born Aug. 16, 1900, to Sarah Heflin. At the outbreak of World War I, he joined as a private in Company I of the 302nd Stevedore Regiment, which departed Hoboken, N.J. on the George Washington Dec. 4, 1917. The 302nd was organized in Virginia in Oct. 1917 as a Quartermaster Corps with Col. W.G. Austin assigned as commander and later transferred to the Transportation Corps. Heflin was with his regiment in France when he died of pneumonia on Feb. 8, 1918. A Huntsville newspaper reported two days later, “Among the deaths…reported by General Pershing…John C. Heflin of pneumonia of Brilliant, Ala.” He was only 17.

Horber
Emmet Horber was born March 27, 1890 in Spring Garden, Ala., in Cherokee County. He lived for a time in Rome, Ga. Another World War I veteran, he enlisted April 27, 1918, as a private in Company B of the 324th Labor Service Battalion, Q.M.C. He also served as private first class in the same company. Horber and his regiment sailed on the Manchuria from Hoboken on July 10, 1918, and returned on the Mount Vernon, departing from Brest, France, on June 28, 1919. It took one week for the voyage with Horber arriving back in Hoboken on July 5, 1919. He was discharged from service on July 14, 1919. His serial number was 2 045 945. Information researched shows his mother as Susie Horber, wife’s name as Lillian and daughters as Izea and Pauline. He passed away Nov. 27, 1950. His tombstone was ordered June 3, 1952. His death certificate states he was born March 1888, was a coal miner and the informant’s name was Myrtie Horber.

“To me, history is history,” Ferrell mentioned. “These people were part of Brilliant history as far as the mining.”
According to the Birmingham Public Library, there were several who died in mining accidents in Brilliant. Two who cannot be found in other cemeteries, and possibly buried at the BCMC, are Will McTerrill and John Wooldridge Jr. McTerrill passed away July 26, 1915, and Wooldridge passed away Sept. 13, 1913.
Those with information on the cemetery are urged to contact Ferrell at (731) 616-4570 or jrf4570@gmail.com, the Journal Record at (205) 921-3104 or the Northwest Alabamian at (205) 486-9461.