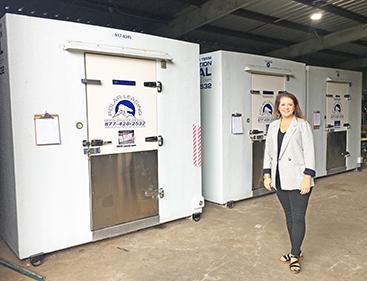 Emma Anne Hallman, director of the child nutrition program at Haleyville City Schools, shows the three rented coolers that are being used to store perishable items for each school on campus.

HALEYVILLE  -   Educators are fearing that food shortages at school cafeterias, caused by a lack of workers in distribution warehouses and truck drivers transporting goods, may only be the beginning, with the worst yet to come.
Haleyville City Schools is taking extreme measures both in storing and substituting menu items in order to offset these shortages so they can continue to provide nutritious foods that meet state guidelines.
HCS Superintendent Dr. Holly Sutherland informed members of the board of education during a Tuesday, Sept. 28, work session that the school system may be seeing just the beginning of a major food shortage.
“We are experiencing and have the potential to experience some major food shortages over the next couple of months,” Sutherland pointed out.
“We’ve had schools around the state that are already having major food shortages,” she added. “There’s a

lot going on in food service.  We’re trying to make sure if we do have some shortages that our kids have the proper nutrition.”
However, Sutherland fears, the food shortage situation will only get worse.  Food distribution warehouses are stocked with foods to be shipped, but a shortage of truck drivers means there is no way to ship this food out, in order to be delivered in a timely manner, Sutherland further explained.
“(The shortage) is hitting in a weird variety of ways,” Sutherland noted.
For instance, the school is having trouble receiving nacho trays, she illustrated. “Who would have thought that would be a shortage, but we can hardly get them,” she said.
School officials are also seeing shortages of such common menu items as Crispitos and Uncrustable peanut butter and jelly sandwiches.
“A lot of them are things our kids eat very well and enjoy,” said Sutherland. “So, we’re trying to pre-buy as many of those things as possible.
“We have loads of hamburgers,” she said.
“Our bottom line looks great. It’s just making sure we can get in products,” Sutherland told the board.   “You may see some complaints about a little bit less choice, or we’ve served something a couple of days in a row, as far as chicken fingers at different schools,  that kind of thing.”
Emma Anne Hallman, director of the child nutrition program for HCS, noted this food shortage is a nationwide issue, but can be handled with the right approach.
“You’ve got to think ahead and think non-traditionally,” Hallman pointed out. “Be creative and think outside the box of how we can still provide the same quality food, the same customer service, but in a different way and make it work.
“COVID was manageable because we were still serving students on a daily basis. We just had to change our operation of how that looked for us.”
These changes included cupping fruits and vegetables into individual servings and providing bulk  meals to be sent home with students, Hallman said.
“Now, the stress is physically not being able to get products to serve students or needed supplies to serve or transport foods in,” Hallman stated.
Hallman began noticing food shortages to schools in May as they were being advised by the state department of education to stock up on paper goods or shelf stable or non-perishable goods, she explained.
“Things changed rapidly between the start of school continuing now into October,” said Hallman.“It’s gotten much worse.”
All the while, school meals have continued to meet state guidelines of being high in grains and low in sodium, school officials said.
“It’s not like we can go (to a local store) and just pull something off the shelf,” Hallman noted. “It may not meet the exact specifications.”
COVID-19 created a major impact on the K-12 food service industry, according to CNP officials.
“Our food manufacturers were putting the focus on grocery stores and other retailers because there were so many school closures across the nation. These companies had to scale back their operations,” Hallman explained.
These companies then started seeing shortages in the labor force due to COVID,  officials added.
“It has snowballed into not being able to have the products that are needed to make the item, the labor force to physically make the item and then they don’t have drivers to get the product from point A to point B,” Hallman said.
The problem, in not being able to get food products from warehouses to the school, has caused schools such as HCS, to rethink operations, in order to make sure students continue to have nutritious foods that meet state guidelines.
Chicken, a very popular item among students, is a product that has been slack in coming to HCS, according to Hallman.
“Across the board, that is one of the number one items that we’ve not been able to get,” Hallman stated. “The state is now telling us  that through the main service vendor we order from, they are allocating a certain number per school.”
On a typical basis, HCS uses 30 cases of uncrustable peanut butter and jelly sandwiches a month at just the high school, Hallman illustrated.  Due to shortages, the high school is only being allotted five cases per month, Hallman pointed out.
“We’re still receiving shipments,” she said. “They are either delayed or they are shorted.” In the meantime, the school is receiving constant communication from their vendors on the status of their shipments, Hallman explained.

HCS reaching out to
local businesses for help

Due to these situations, HCS has been reaching out to local grocery stores and other businesses for assistance in obtaining items.
Both  Piggly Wiggly and Goar’s Market in Haleyville have been able to supply HCS with enough Uncrustables to last through January, according to Hallman. The school has also reached out to Furniture Supply for plates and other paper goods, she noted.