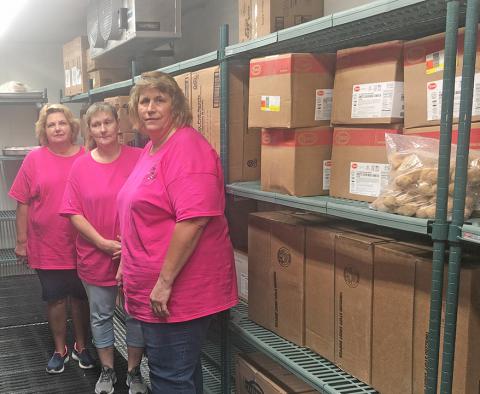 Crystal Parrish, far right, manager of the Double Springs Elementary School Cafeteria, is shown with employees Crystal Colburn and Debra Sutherland inside the new freezer, where they are storing perishable items ahead of possible food shortages..

WINSTON COUNTY  - The goal of Winston County Schools is to provide students with the most nutritious lunch, even if it means pulling from additional resources.
Bart Shannon, administrative assistant for Winston County Schools, as well as director of the system’s child nutrition program, noted the school system is facing a lack of availability in some food offerings for cafeterias across the county.
“We’re in constant contact with our providers. They email us on a daily basis, letting us know about schools in our district or schools that are going to miss their delivery,” Shannon said.
The Winston County system, so far, has not missed a delivery of food, but some items that cafeterias ordered were not available, so similar items had to be substituted or different vendors contacted, Shannon explained.
Winston County worked with the Haleyville City system prior to the shortages in developing some secondary contacts with other vendors, which has helped alleviate some of the shortages, he continued.
The biggest shortage faced by cafeterias across Winston County is uncrustable peanut butter and jelly sandwiches.
“We do grab-and-go bags daily for students who maybe don’t opt for the menu item for the day,” he said, “so, we have a steady need for that particular item.  We have had to reach out to local sources to pick those up.”
Items that are available as replacements  for the Uncrustables are pre-cut ham, turkey, cheese and crackers, school officials said.  This substitute product must meet the state guidelines for food service products, according to Shannon.
“We are pretty fortunate right now,” he said. “We have already bought a pretty good supply of Uncrustables.”
These food shortages go back to a lack of workers in distribution warehouses and truck drivers delivering products, officials have confirmed.
“I know we have not been able to secure the Propel water,” Shannon continued.   “I spoke with a representative of Coca Cola, who informed me there was going to be a shortage on Powerade and Gatorade.”
Shannon thanked the drivers in the area for being committed to delivering to school cafeterias.
“Everybody has got to step in and do their part,” he added. “Short term, it could get a little worse. We’re just going to have to wait and see. I definitely think we are going to see more substitutions in items we have had. I think you are going to see our menus change from day to day, week to week, based on what is delivered.”
Crystal Parrish, lunchroom manager at Double Springs Elementary School, noted the school often has to rearrange the menu, in order to use items they are able to receive, when certain items are not available.
“Each week, we get a list  of outs that are not going to come in, and we have so much time that we can reorder something else to take its place,” Parrish said.
Other items the cafeteria has not been able to receive are Mexican rice, lasagna rolls and pre-packaged items, she added.
“We are actually about two weeks ahead,” she noted. “It pays to be ahead anyway, whether something like this is going on or not because you can’t guarantee your truck is going to show up.
DSES has outgrown its storage area for cereal, Pop-Tarts, plates and napkins, so the stage area of the cafeteria has been used to stack boxes, workers noted.
Parrish stressed these items on the stage are shelf stable, meaning they are non-perishable.
Perishable items stay in the cooler or freezer. The  cafeteria received a new freezer and new cooler that is larger than the previous freezer, which was removed, workers said.
“We keep it full,” Parrish said.
“I think we gained a foot to two feet in length and went up a  oot as far as storage space,” said Parrish.
Shannon said that Winston County Schools will do whatever they can to make sure students are provided a quality meal each day.
“As our country bounces back from this, and more people go back to work and empty jobs are filled, I think you are going to see this thing start to diminish and maybe move in the right direction,” Shannon pointed out.
“We  are going to do everything we can between now and the end of the school year to stay on top of it, and as  we see inventory start to get low, we are of course, going to try to prevent that from happening,” he continued.
“When we do see that, we are going to identify  something to substitute in its place.”