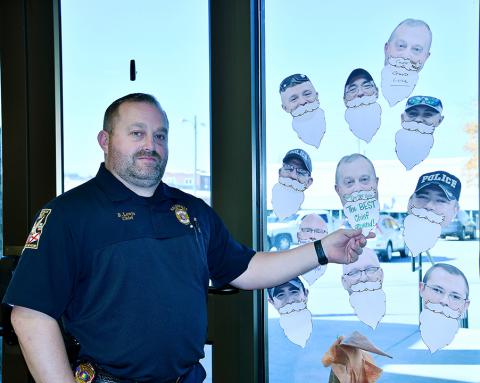 Haleyville Police Chief Rodney Lewis encourages the public to donate to Kruzn for a Kure.

HALEYVILLE - The Haleyville Police Department has chosen to support Kruzen for a Kure this No Shave November and is accepting donations from businesses and members of the public.

Named for Kruz Davenport, a Muscle Shoals child with a rare disease called Schimke immuno osseous dysplasia (SIOD), the Kruzn for a Kure Foundation raises money to support research into treatment and eventually a cure for SIOD.

For every donation received, Chief Rodney Lewis said, the HPD officer of your choice will have another copy of his bearded head added to the window of Haleyville City Hall. According to the Haleyville mayor’s office’s Facebook page, donors can write their own message on the officer’s paper beard.

There is no minimum donation for individuals, Lewis said, and donations can be made until the end of the month, when the Davenport family plans to visit to see the display and take a photo.

While there may seem to be the potential for a bit of friendly rivalry here--who will have the most heads by Nov. 30?--HPD has taken a different view. “We’re just trying to get the department unified,” Lewis said. Rather than a competition, this is a way to bring the police department, local businesses and the people of Haleyville together to help others.

Kruz and his younger sister Paizlee are, according to the foundation, two of only five children in the U.S. with SIOD. Stanford Children’s Hospital (SCH) in California estimates that SIOD may affect as few as one in one million, or even two million, babies born in North America.

SCH is home of the SIOD lab that Kruzn for a Kure funds--mostly with donations from individuals, the foundation’s website reports.

SIOD is a genetic disease that affects multiple systems in the body, including the kidneys, the growth plates of the bones, the heart and arteries, the lungs and the immune system, SCH explains.

Because the bones in the arms, legs, and spine of a child affected by SIOD do not develop fully, a short stature is usually one of the first warning signs that parents or physicians may see, says SCH.

Children with the severe early-onset type of SIOD have historically had a life expectancy of nine years, but those with milder late-onset cases have lived into their 50s, according to SCH and the National Organization for Rare Disorders (NORD).

A child can only inherit SIOD if both parents have a particular recessive gene. Even then, notes NORD, each child of two carrier parents has only a 25% chance to receive the gene from both parents and thus present with SIOD.

According to NORD, SIOD’s prevalence worldwide is still unknown.

Meanwhile, SCH physicians are finding success with the two-pronged treatment they’ve developed, namely building each child with SIOD a new and healthy immune system from the stem-cells of a parental donor prior to a kidney transplant from that same parent, an approach SCH hopes may one day lead to a cure for SIOD. Kruz and Paizlee Davenport were the first patients to receive this treatment.