Haleyville BOE seeks guidance on how to fill vacancy 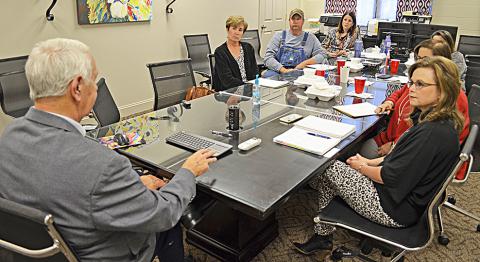 HALEYVILLE    - Members of the Haleyville Board of Education had questions for Mayor Ken Sunseri, a special guest at their Nov. 8, work session, about the steps that should be followed to fill a vacancy left by the resignation of Barry Burleson.
Haleyville City Schools Superintendent Dr. Holly Sutherland asked Sunseri to go over an update on the process of selecting a candidate to fill the place 2 vacancy with board members. Sutherland explained that both the city and school have shared interests in the school board seat being filled.
“What the board is unsure of, and wants to know, is what are the possibilities?” Sutherland began. “Are we looking at a certain timeframe? Are we looking at an election versus you (the city) appointing (a school board member)?
“If we could have a discussion and you guide us, as far as what is everybody’s thinking as far as the council appointing, or do we need to have an election?” Sutherland continued as she addressed Sunseri. “What will that cost us if we do decide to have an election?”
Code of Alabama Title 16 under Education, Chapter 11, under City Boards of Education, Section 16-11-3 Election, Terms of Office, Vacancies, notes that in the event of a vacancy from a city board of education by resignation or otherwise, “the fact shall be reported  to the City Council...by the board, and the council shall elect a person to fill the vacancy for the unexpired term.”  The wording of that section was the center of significant discussion during the meeting.
“The way the format is designed is people submit their applications to the city clerk and the city clerk, in turn, is required to forward them to you,”  Sunseri said about the process of residents putting their name out as a possible candidate for the school board position.
The composition of the Haleyville City Council, however poses some concerns when it comes to the  city council making the appointment to fill the school board vacancy, Sunseri explained.
“Three of our members can’t vote,” he said. Sunseri explained that Julie “Boo” Brooks cannot vote due to being employed by Haleyville City Schools. Council members Blue Russell and Brian Berry each have wives employed by the school system, Sunseri added. The only members of the council who would not have a conflict of interest if the council selects a candidate to fill the school board vacancy are Drew Thrasher, Dr. Ray Boshell and Sunseri, who is allowed to vote under Alabama law governing municipalities, members discussed.
“Depending on who your selection is, that may knock out another board member from voting,” Sunseri pointed out. “We have to have at least two people to vote.
“What it comes down to is, do you (the school board) want to make a selection out of the list that you have?  If we decide to have a special election, we’ve got to get with the probate judge. We can’t combine with another election,” Sunseri continued.  “We can’t put the school board with the (May 24, 2022) primary.” he added.
The cost for a separate election will be between $25,000 and $35,000, according to Sunseri.

If a special election route is taken, the first step is for people to come to Haleyville City Hall and register to be candidates for the vacant school board seat, the mayor explained. Then, ballots must be printed, he added.
“This is not a real easy process. It takes time to do,” Sunseri said, adding it takes about three to four weeks to have ballots printed. Due to COVID and shortages in supplies, orders are being delayed, according to Sunseri.
Next, a contract would have to be done for voting machines which must be installed then tested before the election, he continued.
A run-off election would be a possibility if, for example, six candidates were on the ballot for the vacant school board seat, the mayor said. The run-off would normally be held six weeks after the initial election, according to Sunseri. This would mean, he added, that several months would have passed before a person would be elected to fill the vacancy.