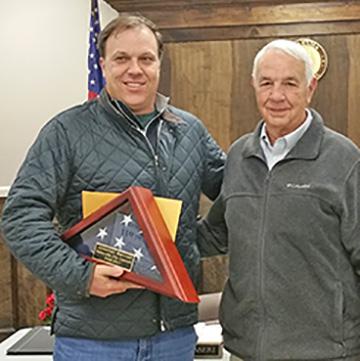 HALEYVILLE -  The Haleyville City Council began the new year somberly Jan. 3, with members expressing their sadness over a fire earlier that morning that killed a mother and her two children.
With council members spaced farther apart due to yet another local rise in COVID, Mayor Ken Sunseri began the meeting by asking City Attorney Jeff Mobley to give the opening prayer.
“Heavenly Father, we come to you with heavy hearts tonight, thinking about Ricky Evans and the loss he has had.  We pray peace and Your blessings upon him as he goes through this trying time.  I pray that our community will rally around him and the rest of the family as they go through the grieving process.  Father, help us to be the kind of people that You would want us to be, to be able to reach out and help and to be comfort to those in need,”  Mobley prayed.
All members were present, with council member Julie “Boo” Brooks attending by phone.  Phone attendance is still currently allowed for governmental meetings due to the ongoing effects of COVID-19 under an order by the governor.
Former council member Jonathan Bennett was honored by Sunseri and the council before they began tackling the meeting's agenda.  Bennett was presented a plaque by Sunseri, who stated that Bennett should be honored for all he has done through the years to help the community.
After approving the regular council minutes from the Dec. 20, meeting, a change order for the Mineral Springs Project was approved.  This project, which is being paid for through a Community Development Block Grant the city received, is improving street, drainage, water and sanitary sewer issues on 7th Avenue South at Mineral Springs Apartments.  Robinson & Sons Construction Services, Inc., the contractor on the project, has requested reimbursement on some items listed on a change order for the project, including 6-inch and 8-inch ductile iron epoxy-lined sewer pipe and 6-inch sewer pipe sleeve, additional pipe support, stainless steel “L” brackets, additional curb and gutter and concrete drive.  The total cost is $39,702.  Council Member Drew Thrasher, who works for the sewer department, abstainined from the vote.  An extension of 38 calendar days for the project to be completed was also approved as part of the resolution.
The council also approved a resolution for the city to apply for funding from the Alabama Industrial Access Road and Bridge Corporation in the amount of $276,649.75 to improve the existing industrial access road in Botush Industrial Park.  The improvements will benefit Bassett Furniture Industries, which is making a $5 million capital investment in their Haleyville facility, an investment that will ultimately lead to 60 more jobs at the facility.  Sunseri noted that the city may have to apply additional funding to the project, which will be discussed once a decision is made regarding the funding request.
Bennett, who is the director of Bassett Outdoor Alabama, the line produced at the Haleyville facility, thanked the mayor and council for their action on the matter.
The council added an item to the agenda, which was to approve a settlement reached between the State of Alabama and Endo Pharmaceuticals regarding opioids.  The city entered into a national class action lawsuit last year against pharmaceutical companies that allegedly helped push opioids on communities, an issue that has ultimately created large amounts of addiction and the tragedies that can occur from it.  Sunseri asked Mobley to explain the situation with Endo.
“Endo Pharmaceuticals Inc., and Endo Health Solutions is one of the defendants we have sued in the opioid litigation national class action we had the city to join.  The Alabama Attorney General (Steve Marshall) sued Endo individually and has reached a tentative settlement with this one company for $25 million.  The current estimate of money Haleyville will receive is about $18,900.
“The reason our attorneys have recommended we approve this settlement at this time is (because) Endo is on the verge of going into bankruptcy.  If they go into bankruptcy, we would likely get pennies on the dollar,”  Mobley said.
Mobley then explained that the settlement monies will be required to be used in a specific manner.
“The settlement funds must be used to prevent, treat and support recovery from opioid addiction and other co-occurred substances used for mental health conditions that are long-term lasting chronic diseases that cause major health, social and economic problems,”  Mobley said.
Mobley said there are highly specific ideas for ways to use the money, which will be recommended to the mayor and council once the money is received.  Council Member Dr. Ray Boshell asked Mobley if the national lawsuit is still ongoing.
“The suit against the big guys is still ongoing.  The State of Alabama has not agreed to join the national settlement.  He (Marshall) is still pursuing his own efforts.  We think they will ultimately sign on to the big settlement, but he pursued this one on his own ahead of everyone else.  We hope that will ultimately be to our advantage,”  Mobley said.
Thrasher gave the police department report for the month of December.  Officers worked eight accidents, took 80 incident and offense reports, issued 121 citations, 12 warning tickets and 11 non-UTC citations and made 33 individual arrests.
Thrasher and Brooks both offered condolences to Ricky Evans from the city for the loss of his wife, Cara, and children Annabelle and Jacob on Jan. 3.  Brooks noted there is a fund set up at First National Bank to benefit the family, and a GoFundMe page has also been created.  Thrasher also offered condolences to the family of the late Martha Hood.
The next meeting of the Haleyville City Council will be Tuesday, Jan. 18, at 5:30 p.m. in the courtroom of Haleyville City Hall.  City Hall will be closed Monday, Jan. 17, in observance of the federal holiday honoring Dr. Martin Luther King Jr.