Need free WiFi for a week? Visit your local library 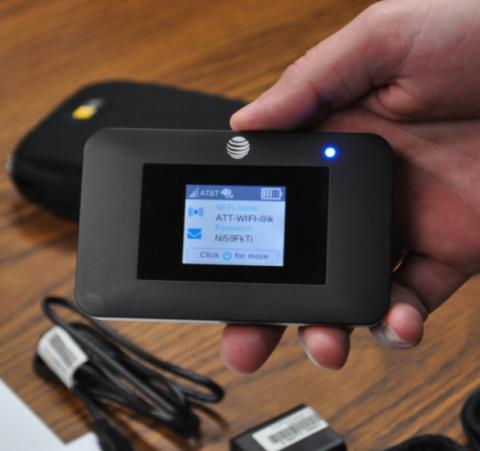 One of the libraries' new WiFi hotspot devices, now available for checkout. Its case and charger may be seen in the background.

These small devices use data from a cellular provider, AT&T in this case, to create a so-called hotspot where wireless internet access is possible.

Each of the three Carl Elliott libraries in Winston County—located in Arley, Double Springs and Haleyville—has two hotspot devices that can be checked out and will soon have three.

Beth Kendrick, head librarian of the Double Springs Public Library, said, “I hope this will be a benefit to the public.”

The devices are simple to use and to borrow. One device per household can be checked out for seven days by anyone 19 or older who has a library card. It can be used at home or while traveling, anywhere there is AT&T cellular service.

“I’m excited about the possibilities for people who don’t have internet access at home,” said George Kruto, member of both the Haleyville Public Library board of trustees and the Carl Elliott Regional Library System board of trustees.

“I know it’s a benefit everywhere, to any library that ever receives these, but especially in the rural areas, especially where service is not really that good—and even for people that are working from home—this could benefit them in many ways,” said Haleyville Public Library’s head librarian, Carla Waldrep.

The hotspot devices were made available by the state library agency, the Alabama Public Library Service (APLS), which apportioned federal funds it received from the American Rescue Plan Act (ARPA) via the Emergency Connectivity Fund to various libraries within the state. APLS earmarked the funds it allocated to Carl Elliott for hotspot devices, said Sandra Underwood.

While operating the devices is easy once one knows how, the devices will come with instructions. Once a hotspot device is turned on, its screen will display the name of the WiFi network to look for in the WiFi settings of the user’s cell phone, laptop, tablet or other device, as well as the password needed to log in to that network.

Just as with a home router, multiple devices may connect to the hotspot’s WiFi at once, theoretically as many as 250, according to Stephen Underwood. He cautions that so many users at once would result in very slow speeds, however.

If the hotspot device is not returned on time, it will be disabled remotely and will become useless.

Library patrons who check-out a hotspot device will be required to read and sign a waiver each time, acknowledging, among other things, that a replacement fee may be charged if the device is not returned. The device must be returned to the branch of the library from which it was checked out.

If all the hotspot devices are checked out at once, a patron may place a hold on the first one scheduled to be returned and check it out once it is.

If you don’t have a library card and want to try a hotspot device, it’s easy to get your first card and free to residents of Winston and Walker counties and anyone who works, attends school or owns property in those counties. All you need is a photo ID and proof of your current physical mailing address. If you have lost your library card, you can get a replacement for a $5 fee.

Library cards also allow you to check out e-books as well as physical books, and a card from any Carl Elliott library can be used at any of its other libraries. In addition to the Winston County branches, Carl Elliott libraries are also located in Carbon Hill, Jasper and Sumiton.