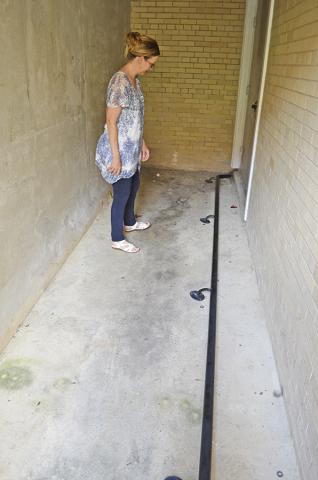 Haleyville Librarian Carla Waldrep shows where the iron railing was removed from thestairwell behind the library.

HALEYVILLE        -  Haleyville Police are increasing patrols and re-enforcing rules to close off two parking lots where youth are congregating after another major vandalism incident.
Vandals have caused extensive damage in downtown Haleyville once again, with merchants voicing their desire to have restrictions placed in order to keep youth from congregating and doing mischief.
The area around the Haleyville Public Library has once again been the site of destruction from vandals, who struck Saturday night, May 7, according to surveillance video released by the Haleyville Police Department and posted on social media.  The videos show a congregation of young people around the library area, where a large iron guard rail was later found removed from a brick wall, a light fixture broken out and a sign pulled up, foundation and all.  The sign was used as a prop for the young people to pose next to for photos.
The extensive damage was first noticed by a city employee and told to Librarian Carla Waldrep on Monday, May 9.  The employee had noticed the iron railing down from the stairwell leading to the basement behind the library, Waldrep stated.
Waldrep estimated the railing has been on the building since it was first built in 1939 as the city’s post office.
“It was bolted into the brick wall, and it was down at the bottom of the stairwell,” Waldrep pointed out.
Later in the morning, the employee noticed other apparent acts of vandalism, she added. The top of a water main had been removed at the side of the library building and a light broken out at the bottom of the stairwell, where what appears to be two red stains were found in the concrete.
A sign indicating disabled parking, which had been removed from an area farther up Main Street was brought in the bed of a truck to the rear wall behind the library, according to surveillance video.
The sign was then unloaded, propped up beside a youth who held up his hands, as if in pride, then the sign placed back into the truck’s bed, according to surveillance video.
“After watching video footage, we began to discover lots of the goings-on over the weekend,” Waldrep noted.
“It’s really upsetting.  It always is to me,” said Waldrep. “It’s disturbing to me. There is no excuse. It is utterly ridiculous.
“I have stated before that oftentimes, people use the excuse (that) it’s boredom. No, it’s not boredom,” Waldrep pointed out. “You can watch the video and watch the goings-on around here and know it’s not boredom.
“It’s just vandalism,” Waldrep continued. “It’s all it boils down to.”
Surveillance video being shared by police shows five young people emerging from the stairwell at the rear of the library.
The video also shows a large congregation of youth at the wall behind the library, as well as people running between the library and the building where Jerry Jackson’s law office was once located.
“At one point on the video footage, we could count 15 who were at the back wall,” Waldrep said.
“Once they got to the back of the building, they broke into a run,” she added.
The library carefully monitors surveillance from other weekends, where youth congregating at the library can been seeing doing  back flips off the railing of the side stairwell leading to the basement, as well as hanging over the railing and jumping into the stairwell from the ground level.
The Haleyville Police Department is assuring the downtown merchants they are taking an active stance against this vandalism.
Two juveniles, questioned by police, have confessed to the vandalism acts, according to Lt. Eddie Collins, police department investigator.
“We were searching for the pickup truck that we saw in the video,” Collins said. “It was a GMC. It had a lot of paint deflection on the hood. It would have been easily identified.”
A break in the case came after Police Chief Rodney Lewis posted the surveillance videos on social media.
“Almost immediately, that afternoon, when the videos went out, Officer Austin Lewis got information on who the people were in the video,” Collins pointed out. “He went out and found one of them and brought him and his parents to City Hall.”
Police, through interviews with this 16-year-old juvenile learned the identity of a second 16-year-old male juvenile, who came the following morning with a family member to the police department, Collins explained.