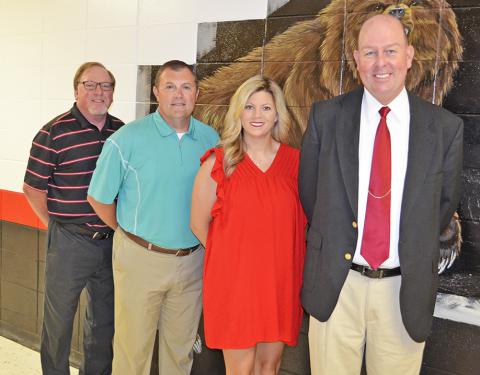 DOUBLE SPRINGS       -  Annah Cagle Black, who served this past year as assistant Lynn High School  principal, has been promoted to the role of principal, replacing Daniel Farris, who was moved to the central office during a recent meeting of the Winston County Board of Education.
At the June 23,  school board meeting, Black was hired effective July 1.
Educators agreed that Black, a Lynn native, as well as former teacher and coach in the system, was a good fit for Farris’ replacement.
At a May 26 meeting, Farris was approved by the board to be administrator over virtual school, alternative school, county truancy, textbook coordinator and district inventory.
Winston County Schools Superintendent Greg Pendley noted that Black was a graduate of LHS and would be a good fit for the role of LHS principal.
“She’ll  do a tremendous job,” said Pendley. “She has helped us in a lot of different capacities and has been in education for a while, so I’m excited for her and excited for the school.”
A 2006 LHS graduate, Black contributed much to the school’s sports program, being on the second team All-State volleyball team, as well as an All-State softball player.  She has been placed into the Winston County Sports Hall of Fame.
Black continued her sports career into college, where she played two years of volleyball at Bevill State Community College.
Her teaching career began at Sumiton Elementary School in 2010. The following year, Black was hired at Curry High School, where she taught math and was the head coach of volleyball and softball until the 2014 season, she said.  After that season, Black continued to coach volleyball for two more years.
“I decided to come back to Lynn to teach in 2018,” Black said. “I took on the head softball job at Lynn for the 2022 season.”
Black noted she was honored and excited to have been named LHS principal.
“I would like to thank our superintendent and board members for allowing me the opportunity to serve our students, faculty and staff,” Black pointed out.  “I am looking forward to the upcoming school year and the opportunities it will bring.”
“Annah will do a good job. She’s a local person,” stated Board President Joey Boteler, who represents the Lynn district.
“She went to school at Lynn,” added Boteler. “Her family lives there. That’s home for her.
“The time she has been in as assistant principal, she has done well,” he said. “She’ll work with everybody. She has (a) good work ethic. She wants what’s best for the school. She wants what’s best for the community.
“It’s more than a job to her,” Boteler continued.  “It was a good fit for us.”
Farris commended Black on the job she did as assistant while he was principal this past year.
“Annah Black brings a wealth of knowledge,” said Farris. “I know she will work tirelessly to constantly improve Lynn High School’s mission, vision, values and goals.
Elementary Principal Brad Alsup noted that Black had filled in for him when he had to be absent, so she is well-versed across the educational spectrum.
“She was very visible and very helpful in the elementary, as well,” Alsup stated. “She definitely handled any discipline or administrative stuff when I happened to be away for whatever reason.
“She has some great ideas,” he continued. “She and I have spoken about a few things moving forward for the betterment of the school.”
Annah married Tracy Black in 2019. The couple has a baby girl, Willa Kate Black. Tracy also has two daughters from a previous marriage, Austen Smith and Logan Black.