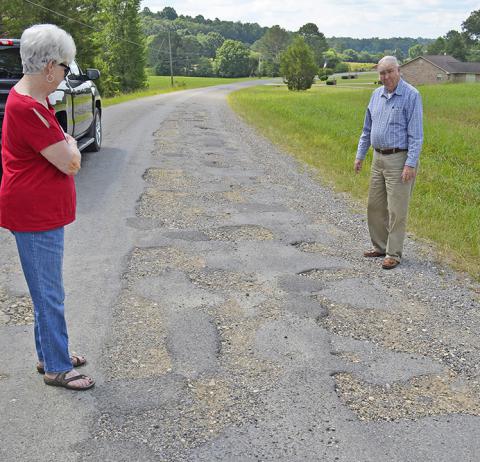 DOUBLE SPRINGS       -  Some local residents are claiming discrimination when it comes to a lack of repairs on a deteriorating road, citing Winston County officials have not kept their promises to check into the matter and see something was done.
Four residents approached Winston County Commission Chairman Roger Hayes, as well as commissioners Bobby Everett and David Cummings at the Monday, June 27, meeting, stating that their section of County Road 2, located off Highway 33, was being neglected by the county and causing a danger to motorists.
Also in attendance but seated in the audience was Rutger Hyche, newly elected commissioner who defeated Everett in the May 24, primary election. Hyche will take over Everett’s seat in November.
“I’m here today to ask a question,”  resident Shirley Johnson began. “Why was County Road 2  paved on the east end, on the west end and about three miles in the middle didn’t get any pavement at all?
“It hasn’t had anything done except a few potholes filled up,“ Johnson added. “I want to know why that happened.
Hayes said he would let Everett or Road Engineer James Glasgow respond to that question.
Glasgow responded that the last portion of County Road 2 that was paved was from Highway 33 to Highway 195, which qualified for federal lands money, since the area is located in the Bankhead National Forest.
“That was district two’s portion of the road that got paved,” Glasgow stated.  “Back in 2012 is when the other section, between County Road 18 and  (Highway) 278 was paved. That was money we had at the time to be able to get that section.”
Johnson interjected, “I can’t understand why it was done at both ends and this little middle left out over here, where we live.”
“Like I said, the section last  year was David Cummings of  District 2,” Glasgow said.
“That has been paved three times,” Johnson said. “We’ve got nothing.”
“What I’m saying is that is not district one’s section,” Glasgow responded. “So we just didn’t leave that section out. We have that section in the Rebuild Alabama plan, but the money is just not there yet.”
“Well, it came out in the paper three years ago that the money was there for it to be paved,” Johnson said. “I have the paper. I will bring it and show it to you.”
“That’s fine, but you didn’t hear me say it,” Glasgow responded.
Everett then stated that he needed to enlighten the Johnsons about the section of road not yet paved.
“It was scheduled back then like you said,” Everett told the Johnsons, including Shirley and her husband Norman, who was seated beside her, along with two other residents who had come to complain about the condition of a separate road.
“What happened was that County Road 8 money came in too high. We had to make an agreement with the commission to finish County Road 8,” Everett said, addressing Glasgow.  “That shortfalled that section that she is talking about.”
“That all did occur at the same time,” Glasgow said. “That’s when we  transitioned from not having federal aid money to Rebuild Alabama (funds).”
Shirley then exclaimed, “Everybody in that district thinks they have been discriminated on.  We have, and we’re tired of it.”
Shirley continued that the condition of County Road 2 in their area was tearing up their cars.
“You let a UPS truck come through there, and it sounds like a roll of thunder coming through. That’s how bad the road is,” she said.
“Do you have anything else?” Hayes asked Shirley.
Norman then told Hayes he went to talk with Glasgow for four and a half months, trying to get potholes on the road fixed.
“He actually told me two times he would move our problems up front,” Norman said. “He may not remember that, but I did two years ago, but he never did.
“Finally, I just gave up and said to heck with it,” Norman pointed out, adding he replaced tires and had other damage on his car due to striking deep holes in the road.
Sections of the road have deteriorated to the point that the road is at different height levels in different sections.  Also, some asphalt has been pushed up into a pile on the side of the  road.
“I stay on the wrong side of the road 60 to 70 percent of the time,” Norman said. “But,” he said, addressing Glasgow, “you never did come over there and do it.
“About six or eight weeks later...they started over on (Highway) 33 and went down through the woods just a little piece,” Norman continued.
“They stopped. I mean a little piece, I’m talking about half a mile at the most. Since that time, every time I come up here and complain about the potholes, you start on 33 and  never get out of the woods.
“We thought we’d better come over and say something to you people, to see if you could get us some help,” Norman pointed out. “But it doesn’t seem like  we  are going to be in for any help for a while.”
Shirley then added, “I have also talked to some people that have property on Robinson Bottoms.  They live out of county. They come in to Addison and come around that way, because of the road being so rough on their vehicles.”
Hayes then responded, “Take notes, James and Bobby.”
“I think we should be treated just like everybody else is,” Shirley added.
“I agree with that,” Hayes responded.

Among other road concerns, Jack Wade again approached the commission about the road conditions in Paradise Pointe subdivision. Wade has attended the past several commission meetings.
Wade approached the commission, presenting photos and explaining about erosion problems on the shoulders of the roadway.
“It’s washing from the top,” Wade said. “What had happened is they came out and put a pile of gravel over toward the middle of the road.  It washed around that and also cut a rut out in the middle of the road.
“All the water was going around that pile in the middle of the road,” Wade added.
“Do you have anything else?” Hayes asked Wade.
Next to speak was Barry Pharris, also a resident of Paradise Pointe, who voiced that the county kept repairing the same things, but never got to the root cause of the road problems.
“A lot of the problems on our road in Paradise Pointe are caused by the guys that come and try to fix the road,” Pharris said. “They don’t fix the drainage problems. I just don’t understand that.”
Pharris noted the residents of Paradise Pointe had collected money to pay for the materials, if the county would do the work.
“It’s a county road,” he said.  “We’re offering money to buy the materials if they (the county) will do the labor.
“We hope they stop it before it gets any worse and destroys the concrete,” said Wade.
The commission did not give any responses to the concerns about Paradise Pointe