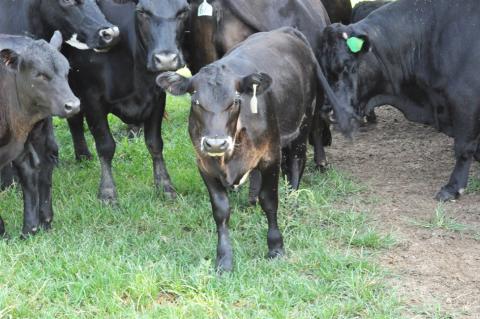 Countless flies, one of several pests that thrive in dry weather, can be seen on Jackson Seymore’s cattle at his farm near Addison on July 8.

ADDISON - We all know we should make hay while the sun shines, but before we can make hay, we need the grass to grow, and that requires rain.
That needed rain has been scarce in Winston County this summer. While Winston has not experienced actual drought conditions yet this year, the recent unusually hot and dry weather is cause for concern for area farmers.
“If we do not get some good rainfall soon, we could fall into the category of moderate drought, which our neighbors (in counties) to the northwest are experiencing,” said Zach Brannon, county extension coordinator for Winston County, on July 8. The day before, the latest data released by the U.S. Drought Monitor had shown a swath of northern Winston to be “abnormally dry.” That area totaled 22.85 percent of the county, according to the National Integrated Drought Information System (NIDIS). Abnormally dry conditions stress forage crops and pastures, causing farmers to turn to supplemental feeding earlier than usual, and also cause ponds and creeks to begin to dry up, per NIDIS.
The data also showed that all of Lauderdale County, most of Limestone and Colbert counties and parts of Franklin and Madison counties were already in a “moderate drought,” as were parts of the western counties of Lamar, Pickens and Sumter in central Alabama, according to the Monitor. In moderate drought conditions, “cash crop growth and yield are low” and water levels in ponds become low, according to NIDIS. The western-most portion of Lauderdale was already in a “severe drought,” a level of drought at which crops, particularly corn, are damaged.
Fortunately, areas of Winston County have seen some rainfall since that data was released; however, new data released on July 14, showed a much larger portion of Winston County, 71.01 percent, according to NIDIS, to be abnormally dry. Also, a larger portion of Franklin County—and now part of Marion County too—is considered to be in a moderate drought.

Jackson Seymore’s farm near Addison received the first significant rainfall it had seen for weeks on July 5.
Seymore farms cattle and poultry and produces hay both to meet his own supplemental feeding needs and to sale.
That rain caused the grass in Seymore’s hayfield to shoot up. He had fertilized the field after cutting the hay a month before, leaving it ready and waiting for a good rain.
But on July 8, even after the rain a few days earlier, in Seymore’s hayfield, the grass’ growth was still two weeks behind, according to Seymore and Brannon, only ankle-to-shin high when it should have been knee high.
“If all the conditions are right, (if) you cut hay off a field and then you fertilize it, thirty days later you should be cutting it again,” Brannon noted. As it was, Seymore was hoping to be able to cut his hay again by August.
When the grass in cow pastures doesn’t grow as much as usual, it may not provide adequate forage for the cattle; if that happens, Brannon said, farmers have to resort to supplemental feeding—or sell some of their cattle.
“(A lack of sufficient food) can lead to problems like reduced pregnancy rates, loss of body condition of the cow and lower milk production, which lowers weaning weights,” Brannon said. “(When there is) a decrease of nutrients coming from forages, farmers need to either supplement or decrease the nutritional requirements of the
cattle.”
He added, “The most common method for reducing feed needs is to sell culls. Consider pregnancy testing and culling open (not pregnant) cows, old and low producers, and cows that calve late in the calving period. This will provide more feed for younger, more productive cows.” He also recommends culling cows for any reason a farmer might usually do so, such as problems with their feet.
Seymore said he hadn’t had to use hay as supplemental feed for his cattle yet, but he knew other farmers who had already had to do so. “That’s getting into your winter supply,” he said, noting that he usually doesn’t need to give his cattle hay until November because the weather stays warm enough here for the grass to keep growing until then—as long as there’s enough rain.
Seymore said he had sold 300 4x5 bales of hay earlier this year. “Kinda regretting that,” he added with a chuckle.
But the grass in Seymore’s pastures, while cropped close by his cattle, was green and growing, which wasn’t true for every Winston County farmer. Brannon said, “There’s a lot of fields (that), when you walk across them, (are so dry that) they crunch. His are not doing that. He’s in pretty good shape.”