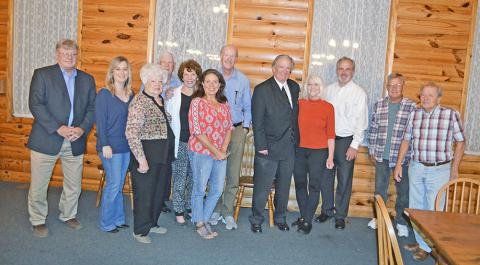 LAKESHORE       -  The rich history and heritage of the Looney’s Tavern Amphitheater and complex will no longer be a distant memory, now that it is being revived with endless plans for  future development.
The long-awaited day  of selling the vacant complex into caring hands to preserve its future came Thursday, Oct. 13, when the Winston County Arts Council officially purchased the seven structures on 13 acres from brothers T.J. and Mickey Milligan, who have owned it since 2010.
The Milligan brothers met with J.D. Snoddy, arts council president, as well as his brother, attorney David Snoddy, to sign the necessary paperwork to close the sale.   The closing occurred just before a regular arts council meeting, which appropriately, was held on the Looney’s site in the building once known as Sister Sarah’s Restaurant.
The Milligans explained they used the Dual Destiny theater at the complex for gospel singings, family reunions and arts council plays, but the financial burden of overseeing the complex became too great.  The heavy financial burden was also faced by the group of initial investors that pooled their resources to build the complex in the 1980s, according to Greg Farris, one of the initial investors.
“As a private organization, it just really didn’t have a chance at survival because it took too much money to keep it operational,” Farris said.
By the early 2000s, the investors felt the site had become too great of a burden, so it was deeded to the Town of Double Springs. The town had control of the  property for about eight years,  but could not pay the debt and later sold the property at auction to pay the debt at the bank--debt that had been accumulated by the original private investors, noted Double Springs Mayor Elmo Robinson.
When they were asked why they purchased Looney’s, the Milligans could not recall.  However, they sold the property to the Arts Council for $272,000, in appreciation to the arts council for what they do for Winston County and knowing the council would develop the property as it needs to be for future generations to enjoy.
“They have always shown some interest in it,” Mickey stated. “I am glad they are able to get it.”
T.J. added he was proud the arts council would use the property to benefit the community and county rather than a private investor purchasing it.
“We could have pursued selling it to some individual somewhere and probably made some money on it,” Mickey added. “But I’d rather these people have it because it’s a community thing.  That is what this was in the beginning.”
The Milligans  referred to the sale as bittersweet.
“You have to keep your mind in the right place, or we’d want to keep it,” Mickey said.
J.D. Snoddy noted the mission of acquiring  is to make the area and county a better place and to boost future economic development by having plays, festivals and other events at the site.
“This is a good night for the people of Winston County and north Alabama,” J.D. pointed out.
“We worked together and made this happen with lots of folks  involved. This is a “we thing” for the whole county and north Alabama.  They enabled it to happen. We just can’t thank everybody who has been a part of it and continues to be a part of it, enough,” J.D. added.

Major renovations to be done step-by-step

Now that the arts council has officially purchased the property, the next step is to make major renovations, J.D. said.
“We’re getting a lot of good cooperation from people around the county, around the cities, north Alabama and the state also,” he added. “We look forward to good things happening.”
Theresa Snoddy, arts council vice president, envisions the Looney’s being not only for entertainment, but education.
“It’s educational for the kids to learn about the history of Winston County,” Theresa said.
The arts council wants to eventually open a gift shop featuring works by local artists.
“We’ll have things hopefully going on all the time here,” Theresa added.
Other plans are to do historical reenactments and a live history day with people in period costumes.
Since donations have helped the arts council secure the property, plans are to conduct fundraisers and other events to raise money for renovation costs, which could be as high as $500,000, according to arts council members.
The first step, literally, is to replace the wooden steps, many of which have rotted, from the parking lot down to the concession stand/ticket building and amphitheater.
“We’re going to get rid of the safety concerns first,” Theresa explained.
In the step-by-step process J.D. mentioned, the first structure to be renovated and repaired will be the Dual Destiny Theater, where dressing rooms will be added, arts council members stated.
At that point, Dual Destiny will be ready for small group performances, with seating for at least 250, according to Theresa.
The Winston County Free State Theater Troupe, which was created by the arts council and has performed several plays at the theatre,  will be housed at Dual Destiny, she noted.
After those renovations are complete, the next renovation will be at the amphitheater, where growth has crept into the seating area.
Hopes are to secure funding through grants, arts council members stated.
Plans are to eventually bring back the putt-putt golf course that now sits abandoned.
“We need more entertainment for all ages,” Theresa said.
“People from Winston County have been so wonderful. They’re donating, and they are excited.  We’re so proud of Winston County backing us on this,” Theresa pointed out.
Arts Council Member Blythe Welton noted the Looney’s complex has a rich history of performances.
“It’s exciting to be bringing that back again,” Welton stated, “to be in a place that so many people around the county remember (as) part of their growing-up years, watching musical performances and, of course, ‘The Incident at Looney’s Tavern.’
“If the people in this county want this to be not just a place for entertainment, but truly a cultural arts center, then we need all kinds of support,” added Welton, “not just financial but actual volunteers to bring this place back to the way it was remembered.”
“I think it can really have potential,” Farris noted.
During the height of the Looney’s complex’s success, it was rated as one of the top attractions in the state, Farris recalled.
“They might not know Winston County, but they knew Looney’s Tavern,”  Farris recalled
Since the Winston County Arts Council is a 501(c(3), any donations made on behalf of the arts council are tax deductible, according to J.D.
A GoFundMe account has also been set up and is accessible through the arts council’s website, www.winstoncountyartscouncil.org, as well as through their Facebook page, according to arts council members.