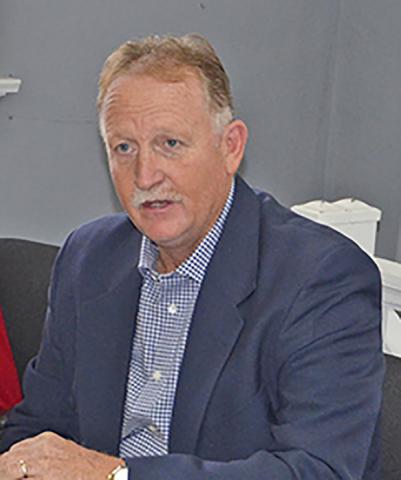 DOUBLE SPRINGS   -  Family and friends of outgoing Winston County Commissioner Bobby Everett filled every available seat at the Monday, Oct. 31, commission meeting to voice their support for Everett at his last meeting after serving the past 12 years.
Everett, who was defeated in the Republican primary election by Rutger Hyche earlier this year, felt bittersweet regarding all the emotion and support shown him, including input from residents at the meeting, as well as a reception held in his honor following the meeting.
“I don’t know what to say, other than thank you for being able to work with me, David (Cummings, Winston County Commissioner), (Commission Clerk) Judy Burnett and the staff. People of Winston County, I was blessed to be able to work for you,” said Everett as he looked at the crowd gathered in the meeting room.
“You learn a lot as you go through life,” Everett added. “I have learned a whole lot on the commission. I love the people and I would just like to thank them for the opportunity of being able to serve them for 12 years.”
After a brief emotional pause, Everett continued. “I’ll continue to help any way I can.”
These remarks resulted in comments throughout the room voicing support for Everett and the work he has done the past 12 years.
“I would like to say it’s been great working with you the past 12 years,” Cummings added. “We’ve done a lot together as a commission.”
“Bobby, it’s not going to be the same, coming over here and you’re not  here,” spoke out Carl Godsey from the audience. “We appreciate you, Bobby.”
“I’ve gotten along with both of them (commissioners),” Doug Rice added. “Anytime I would call, (Bobby) would answer the phone or call me back.  That is worth a lot, just to get a call back.
“It’s been nice to know you,” added Rice. “Bobby has done a good job for us in Black Pond.”
“I have know Bobby before we became commissioner and I will know him after he is a commissioner,” stated Commission Chairman Roger Hayes. “Good luck in your endeavors in the future. You have a great family.  We’ll miss Bobby being here at the meetings.”
Winston County Sheriff Horace Moore thanked Everett for the work he has done on the commission and the support he has given the sheriff’s office.
“It has been a pleasure working with you, Bobby,” Moore stated.  “You have been very supportive of me. I really appreciate it, Bobby, for what you have done.”
Everett added he wanted Hyche to do well as an incoming commissioner.
“I want him to be successful. I want our county to move foward,” said Everett. “I’ll help you in the background any way I can.
“Our county is counting on you,” Everett said to Hyche, who was also in the audience. “I know you will do a good job. I respect this office and what it holds.  Storms come and go, and they have come and gone in our 12 years.  This pandemic that came along has hit our United States and is still hitting us.
“American people can get through it together,” Everett continued.
Andy Scott, district ranger of the U.S. Forest Service office in Double Springs, who was also in attendance, wished Everett well.
“Thank you, Bobby, for working with me the last several years,” Scott said.  “I do appreciate all of our encounters, whether we could move forward, or in some cases not.
“It was always good to work with you and thank you for your service to the county,” Scott noted.
Commission Attorney Hobby Manasco addressed the commission in support of Everett.
“From a legal standpoint, Bobby has been good to work with,” Manasco stated. “I appreciate all of his efforts, and I think he knows that.
“I just want to say to everyone who is close to Bobby, thank you very much,” Manasco concluded.
Everett served on the Winston County Board of Education from 2000-2008, and was first elected to the commission in 2010, defeating Dewayne Johnson. Incumbent Tommy Farmer did not seek reelection.
Everett was reelected in 2014, defeating Mark Dickerson in the primary and Democrat Owens Taylor in the general election and again in 2018, defeating Steve Baldwin and Wes Brown in the primary.