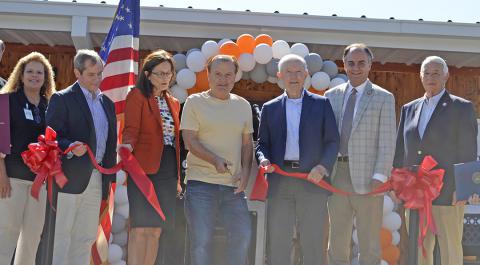 Factory Manager Lynda Arnett accepted Tuberville's statement from Shelton on behalf of all Exxel employees.
Paul Housel, district field director for Aderholt, read a statement on the congressman’s behalf to those employed by Exxel Outdoors.
“I would like to congratulate the workers of Exxel Outdoors of Haleyville for their dedication in producing high quality products that represent Alabama exceptionalism,” Housel read.
“Your hard work and attention to detail have contributed greatly to the overall success of Exxel Outdoors and bolstered Alabama’s strong reputation for being a great state for manufacturing,” Housel added.
Housel called employee Tammy Sartin forward to receive Aderholt’s proclamation on behalf of employees.