Snoddy sworn in as Winston’s sheriff 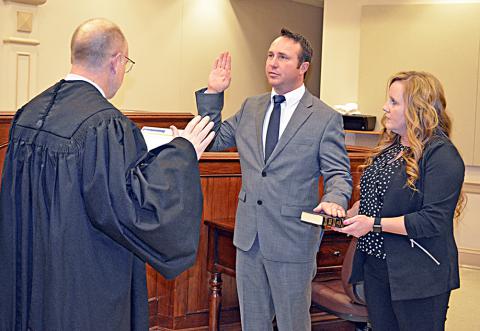 DOUBLE SPRINGS       - A new era began for the Winston County Sheriff’s Office Tuesday, Jan. 10, as Caleb Snoddy took the oath of office in a special ceremony.
Conducting the swearing-in ceremony, held in the courtroom of the Bobby Aderholt Judicial Complex in Double Springs, was Circuit Judge Lee Carter.
Snoddy, who held up his right hand with his left hand on the Holy Bible held by his wife Santana, repeated the oath of office to officially succeed Horace Moore as sheriff. Moore did not seek election after being being appointed by Governor Kay Ivey in 2019 to serve out the remainder of former sheriff Tommy Moore’s term after Tommy resigned due to illness.  Horace was present at the ceremony along with a large crowd of family members, friends and law enforcement officials--giving their support to Snoddy.
After a roaring round of applause, Snoddy addressed the audience.
“I just want to say I really appreciate everyone coming out. This means a lot to me. It means a lot to my family. I can thank each one of you individually for all the support and help every one of you has given back to me in  a special way in my life,” Snoddy added.
“I would like to especially thank Sheriff Moore for being so gracious, kind and supportive, and just being a mentor and a teacher for me for pretty much all the years I have known him,” Snoddy added. “He’s a great man and a great leader and I really appreciate him helping me in this process.”
Snoddy also thanked all members of the sheriff’s office, as well as his parents, who were also among those in attendance.
After those remarks, Snoddy led the assembly in prayer.
“Lord, we come to You tonight humbly and we thank You for Your presence here,” Snoddy said. “Lord, we thank You for what You have done for each and every one of us. We thank You for Your faithfulness, and we thank You for the days to come, and what they will mean to each and every one of us.
“God, we thank You for having Your hand on this sheriff’s office and for all the people involved in it,” Snoddy continued. “We thank You for each and every person here.”
Horace stated he was proud to have Snoddy on board and wished him well. Horace and Snoddy have been friends and have worked together for the past nine years, he said.
“The transition has gone well, and I want to help him all I can whenever he needs me,” Moore said.  “If he wants to call me, I’ll be available.  He’ll do a good job.”
Snoddy official took over the role of sheriff Tuesday, Jan. 17.
Snoddy has been with the sheriff’s office since 2013, starting as a jailer. Snoddy completed the law enforcement academy the following year and worked as a deputy for three years.
Snoddy was moved to the position of investigator by Tommy Moore and remained in that position four years.  Snoddy was moved to the role of chief deputy by Horace.
Snoddy admitted he had sought the sheriff’s seat due to a deep love for the sheriff’s office.
“Since I have been here, I have always wanted to strive to make it better every way possible,” Snoddy said.
“We are going to work very diligently toward all the things the sheriff’s office encompasses - fighting crime, safeguarding the community, protecting the elderly and the young and educating about various things within the community,” Snoddy pointed out. “We will be easily accessible and there when you need us.”
Winston County Commission Chairman Roger Hayes said the commission would support the new sheriff and work with him every way possible.
“I have worked with him the last several years and he has been good to work with,” Hayes said. “We appreciate what Horace did. Caleb did a good job, and I am looking forward to him continuing to do that.”
Commissioner David Cummings added, “We have to work hand-in-hand on a very tight budget.  The commission and sheriff have to work together daily to make sure everything stays in line. I welcome him on board and look forward to working with him.”
Commissioner Rutger Hyche noted he has known Snoddy a long time, dating back to when Hyche was a reserve at the sheriff’s office, as well as served beside him as constable.
“As a deputy, he served with honor and integrity, and I believe he will continue to do that as sheriff,” stated Hyche, who is serving his first term as commissioner.
“This is a new journey for both of us, and being able to work together on issues is going to be great,” Hyche pointed out.

The transition of Snoddy to sheriff creates another change in the sheriff’s office, one of Jacob Eward moving from investigator to chief deputy, the role formerly held by Snoddy.
Eward, who came on board with the sheriff’s office as a deputy in 2019, was promoted to investigator three years ago.
“It couldn’t happen under a better person,” Eward stated at the ceremony. “Caleb has always worked hard at the sheriff’s office. He has always dedicated more time and effort  than most people I would know.  I am very honored that he has trusted me to take this position as chief deputy.  I will continue to work as hard as I have as investigator. I am going to keep the sheriff’s office moving forward.
“We have a lot of great ideas and things for the future that we’re going to accomplish, training deputies, getting them some more advanced training in different areas, working locally with all departments on different aspects, everything from drugs to the safety of our schools and safety of the communities,” Eward continued.