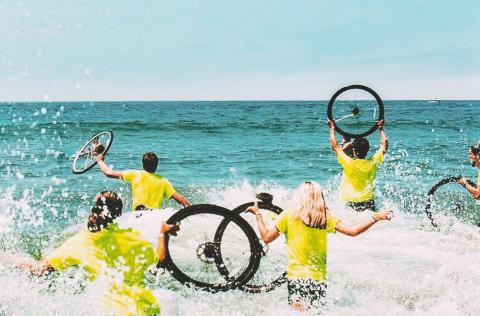 American Challengers bike across the country, with a stop in Double Springs. This photo shows them running into the ocean with their front wheels at Santa Monica on August 8, 2017, at the end of the journey. The latest group will arrive there shortly. Courtesy photo.

DOUBLE SPRINGS - Southern hospitality is extended yearly by Double Springs Mayor Elmo Robinson and others toward Overland American Challenge bicyclists, it was learned at the recent town meeting on July 9.

The American Challenge, sponsored by Overland, is a yearly trip during the summer for grades 9 through 12. The group bikes across the country, starting in Charleston, South Carolina and ends at Santa Monica, California six weeks later. They traverse approximately 85 miles per day.
The route taken leads them right through the heart of Winston County, traveling U.S. Hwy. 278, and Double Springs has become known as a favorite stop.

According to Robinson, prior challengers have told siblings about the reception received in Double Springs, and now a new generation of cyclists want to see what the town is all about.

“They’re a group of kids from all over the United States,” Robinson said. When they get to the west coast, they run into the ocean with the front wheel of their bicycle and dip it in the ocean.

“We’ve been doing this for several years,” Robinson continued. “We host them when they come here. We have been a layover for them, where they call it a rest day. Their next stop (from here) is Tupelo.”

“There’s a Baptist Church group of women who buy a bunch of snacks for them when they get there. They buy them pizza that night for dinner. (The challengers) kind of like it when they get here. If they have time and want to, I take them to the pool and let them swim that afternoon. They probably buy $200 worth of groceries when they get here,” he said.

The mayor receives a thank you card from some in the group every year. He said they keep in touch.

“We’ve done it so much. Now a lot of their brothers and sisters are doing it. They told them about us,” he said.

Last year, one of the challengers fell in Hamilton. She was taken to the emergency room to have her checked out. One of the leaders stayed with her and called Robinson to see if he knew anyone in Hamilton with a pickup large enough to put their two bicycles on and take them on to Tupelo because the rest of the group had to continue on.

"Of course I didn’t know anyone over there who could or would,” Robinson stated. “So I went over there picked them up, and took them on to Tupelo.”

“I’ve had a lot of fun meeting all of them, getting to know some of them. They’re just young kids. If my kid was out like that, I would want somebody to help them out and look after them too.”