Woman charged with assault of an officer 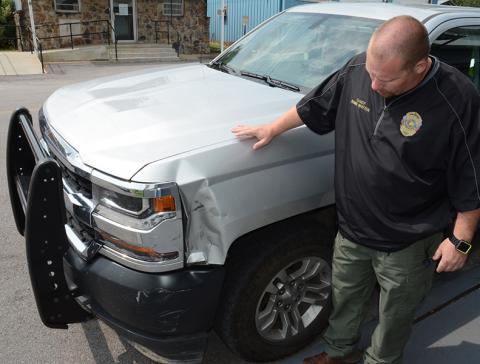 Bear Creek Police Chief Shane Whitten shows some of the damage to his vehicle after it was rammed by the suspect vehicle during a chase.

BEAR CREEK - A Bear Creek woman  has been arrested and charged with aggravated assault on a police officer, reckless endangerment, possession of drug paraphernalia, attempting to elude a police officer, criminal mischief and possession of a controlled substance, said Haleyville Police Chief Kyle Reogas.
Perry was arrested at Highway 278 at the Brilliant area at the end of the pursuit which occurred around 7:31 p.m. on Aug. 10, Reogas said.
Then-Haleyville Police Officer Austin Lewis attempted to stop a silver 1995 Nissan Sentra, at which time the vehicle failed to stop, the chief said.
“She was recognized as being wanted on felony warrants out of Fayette County,” Reogas said.
“I was notified by an investigator of Winfield PD on the warrants,” added Chief Whitten, who noticed the suspect in the vehicle on Highway 195, turning south on Highway 13 in the Haleyville area.
“I followed in behind her and hollered at Austin Lewis who was working for Haleyville,” Chief Whitten said. Lewis is now an officer for the Bear Creek Police Department.
Whitten turned down Highway 129, with Lewis catching up with the pursuit around the area of Jolly Dans’s at the overpass, police indicated.
Lewis passed Whitten and blue lighted the Nissan car, at which point, the Nissan increased speed, police confirmed.
At this point, Whitten passed Lewis and led the chase.
“She was driving all over the road,” Whitten said. “There were times we were running over 100 (miles an hour).”
The pursuit reached the intersection of highways 129 and 278, at which time Whitten passed the suspect vehicle and tried, along with Lewis, to box her in, authorities said.
The Nissan attempted to go around law enforcement, but went into a ditch and got stuck, police said. -  A Bear Creek woman has been charged with aggravated assault of a police officer after a police pursuit of her vehicle, which she used to side swipe Bear Creek Police Chief Shane Whitten’s vehicle before crashing and being  apprehended.

“I stopped in front of her, jumped out of the car, and she got unstuck and took off again,” Whitten said.
The suspect vehicle at this time was traveling west on Highway 289 towards Hamilton, according to Whitten.
Whitten got back into his vehicle and continued pursuit, passing the Nissan again in attempts of boxing her in, he said.
“I was getting in front of her, slowing down, so she would slow down,” he said.
After Whitten passed the Nissan the second time, the Nissan came up beside the driver’s side of  his vehicle as they were both traveling down Highway 278 and swerved over, striking Whitten’s vehicle from the rear all the way to the front, he said.
“She was up against my car and she ended up in a ditch and I pinned her car in,” said Whitten.
Lewis had been traveling behind them during the pursuit, he added.
Once the Nissan struck the ditch, Perry reportedly bailed out of the vehicle and took off running, being chased down and apprended by Chief Whitten after about 60 yards, he said.
“When I got close, she fell down and gave up,” Whitten said. A male passenger in the Nissan was not charged in the case after being secured by Lewis, police on the scene said.
The male passenger was later released to his parents, being basically innocent of any wrongdoing, Reogas said.
Perry was transported from the scene to Haleyville Police, where she was booked on her charges and transferred to the Winston County Jail, Double Springs, Chief Reogas said.
“The reckless endangerment (charge) comes from her operating the vehicle in an unsafe manner,” said Reogas, noting this included running stop signs.
The drug related charges came from Perry having methamphetamine as well as drug paraphernalia in her purse, according to police.
“Any car chase is dangerous,” Whitten said. “She made the statement she was hoping the chase would kill her.
“Both cars can be replaced,” Whitten added. “I’m just glad nobody got hurt.
“I’m glad that’s one less criminal on the street.”
Whitten commended Haleyville Police for a job well done in this case.
“We’ve always worked well together, and we want that to continue,” said Whitten.