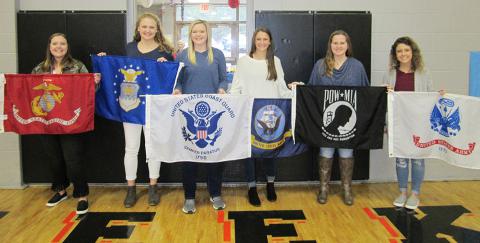 ARLEY - Veterans from many different wars were honored Thursday, Nov. 8, at the Meek High School gymnasium. The school assembly consisted of kindergarten through senior grades. Elementary Principal Heather Tucker welcomed everyone in attendance.

Colors were then posted, and after the Pledge of Allegiance, the Meek High School Band of Champions played the national anthem and a rendition of “Boogie Woogie Bugle Boy.”

“Boogie Woogie Bugle Boy” was known as the big band style and would have been played during World War II. High School Principal Marla Murrah spoke to the audience and veterans.

“We’re all getting advanced in our years,” Murrah said. “Time goes by in a hurry, and there is one World War II veteran I have on my mind today. He passed away last year. I know Odis Bishop would be here if he could.”

“Think about that. I see what used to be World War I, World War II and Korean veterans. I don’t want you kids, or any of us, to forget,” Murrah continued. “I think those who have served our country have done it simply because they loved it. They loved their country. They had passion. They had a commitment.”

Murrah then looked to the veterans seated on the gym floor.

“You are the greatest patriots because you loved your country enough to say, ‘I’ll go. I’ll go defend our country and I will serve to death.’”

After veteran recognition, the sixth grade class performed “sign art” of Lee Greenwood’s song “God Bless the U.S.A.” All sixth grade gathered in front of the veterans and used sign language to convey the chorus of the song.

Neil Feist, a veteran of the United States Air Force and called a hometown hero, gave a speech.

“I’m truly amazed how much this community loves their veterans,” Feist began. “I was on the air force bomb squad and had a lot of fun while I was in the military.”

Feist commented this was his first veteran program he has attended where there have not been any World War II veterans.

“We call that generation ‘the greatest generation,’ and we’re losing them every day,” Feist said.

“It’s a piece of cloth,” Feist said of the American flag. “But it’s a beautiful piece of cloth. It represents the freedoms we have in this country. When I see this representing what it means, like right here today or in parades, I get tears.

The United States of America does it best,” he said to a round of applause. “We have the longest standing constitution in the world.”

Feist concluded his speech with these words: “God bless our veterans. God bless Meek Elementary and High School. God bless all of you. And of course we all know, God has blessed America.”

The band then performed an “Armed Forces Salute” along with “America the Beautiful” and “Taps,” performed by Ana Rubley.

At the end of the program, veterans and their families were invited to refreshments provided by the faculty of both elementary and high schools.

A statement on the program for this event said it all: “Thank you veterans for your service to our country...our flag flies freely today because of your sacrifice.”