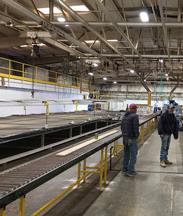 Employees inspect one of the production lines in the plant before the industry opens.

“This is great news for Double Springs and Winston County.  The state unemployment rate is at 3.9%, but a central goal for Governor Ivey and myself is to do whatever we can to ensure that rural Alabama is prospering in this booming economy, too,” Reed said. “President Trump has really unleashed the national economy, and the pro-growth, low-taxes agenda that we have pursued at the statehouse in Montgomery has paid dividends for Alabama.”
Estes noted he was grateful to ADECA for their assistance in helping fund this project.
“This partnership with the town of Double Springs will serve to bring new jobs to our area,” Estes said.
“And we all understand the economy into motion,  when payroll checks are written and employees and their families spend their earnings locally,” added Estes.”

“This was a team effort on behalf of Winston County, and I appreciate the work that Representative Estes, Mayor Elmo Robinson, David Roberson at the Industrial Development Authority and Keith Jones at the Council of Local Governments put in to make this grant a reality,” Reed continued.
Estes commended Mayor Robinson and the town council for pursuing these ADECA funds.
“I am also proud of the company’s interest in bringing these jobs to our region, as they see what Winston County workers bring to the table,” he said. “This is wonderful news for Double Springs and House District 17.”