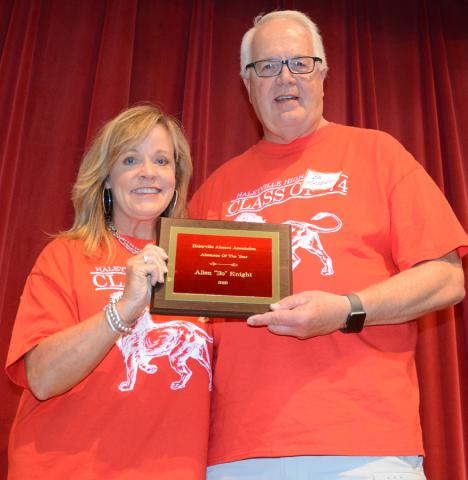 Bo Knight receives the Alumnus of the Year award presented by Debbie Wood, president of the Haleyville Alumni Association.

HALEYVILLE  - Bo Knight, described as knowing the value of hard work and never expecting from others what he is willing to give, was honored with thunderous applause, when he came forward to receive the highly coveted Alumnus of the Year award at the city’s annual luncheon Saturday, June 1.
Knight, who usually kept a lower profile when it came to awards, came forward to receive the award from Debbie Wood, president of the Haleyville Alumni Association on the stage of the elementary cafetorium.
Knight’s words were few but effective.
“A lot of people in this room have influenced me, in respect to the teachers and faculty here at the school, and I appreciate it very much,” Knight said.
Knight, born to Pete and Vernice Knight, grew up in Haleyville where he spent his entire school career. In high school, he loved basketball, was treasurer of his senior class and began dating Sylvia Hyde, who has now been his wife for 43 years, said Wood.
Knight graduated HHS in 1974 and is now celebrating with his class’ 45th anniversary.
Entering the workforce at a young age, Knight’s first job was at Joe’s Sporting Goods in downtown.
At 19, he began work at Big B, a major drug store chain in Alabama at the time, and soon became the company’s youngest store manager.
Moving on to Tidwell Industries, Knight served as plant manager of Berry Furniture for  5 1/2 years.
Lewyn Machinery presented itself as Bo’s next career chapter, Wood continued in the introduction.
George Porter offered Knight the opportunity to purchase in to the company, which he did, and the company name changed to Dixie Woodworking Machinery. In 1989, Knight acquired the sole ownership of the company.
Nine years later, in 1998, Knight launched Door Components which has since evolved into KITH Kitchens, currently offering a wide array of cabinetry options and employing 600 people, making it one of Haleyville’s largest employer.
“Certainly entrepreneurship is not for everyone,” Wood continued. “It demands long hours, commitment, the ability to wear many hats and a willingness to take risks.
“You are forced to adapt, trust your instincts and take the ups and downs. All the while, you bear the knowledge that your livelihood depends on your efforts, and so do the livelihoods of many others.”
Relating a story of how Knight has helped change someone’s life, Wood noted about the time KITH partnered with Top Notch Design and Wounded Warriors to supply cabinetry for the new home of CPI.
Paul Skarinka, who lost his eyesight while on his first tour of duty in Baghdad, Iraq in 2004, lives with wife and two children in Bridgewater, Mass.
“Today with his seeing eye dog, this man continues to serve his fellow countrymen as an EMT paramedic  with his local fire department and ambulance service,” Wood said. “Bo continues to give and give.”
Bo and Sylvia have three sons, Bret, Tyler and Brad, all of whom are graduates of Haleyville and have worked alongside their father through the years.
One of these sons shared that his father has been very generous to HHS over the years.
“Dad loves Haleyville,” this son said. “Even though he moved from Haleyville 12 years ago, he has always desired for the facility to remain in Haleyville. He drives to Haleyville from Muscle Shoals--sometimes twice daily.”
Known as Daddy Bo, Knight has seven grandchildren.
“I’m sure that Haleyville will  have a special place in their hearts as they continue to learn and see all that their grandfather has do ne for Haleyville and the surrounding community,” said Wood.
Wood explained the process by which the alumni association selected committee chooses a person for the Alumnus of the Year award.
The alumni association encourages the public to send letters of nomination throughout the year, to P.O. Box 91, along with the Haleyville Alumni Association website.
When someone is nominated, the association needs to know about their accomplishments when they were at HHS and their accomplishments until present, Wood explained.
The persons nominating need to provide as much information as they can without the person being honored having any knowledge of what is going on.
At the beginning of spring, a committee of alumni, not the association officers, is formed and given the task of going through the letters of nomination which are placed in a binder and are considered each year along with new nominations.
“The only true requirement is that the person selected much have attended Haleyville High School and must not have graduated from any other high school,” Wood noted.
The choice is kept secret, as much as possible, until alumni day, Wood said.