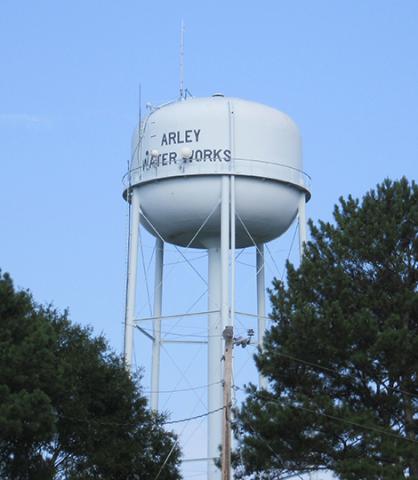 This is one of the three water tanks needing upgrades. It is just north of Arley on Firetower Road. The other two are located at Houston and Nesmith.

ARLEY - The Town of Arley is applying for a $350,000 Community Development Block Grant through Alabama Department of Economic and Community Affairs with help from the North Alabama Council of Local Governments. The majority of the grant will be used to clean and paint the area’s three water tanks. One tank is located in Houston, one at Nesmith and the other on County Road 52, or Firetower Road, just north of Arley.

The grant will also be used to replace valves at the water treatment plant, to fix targets on the tanks and to replace a pressure reducing valve. A water tank target is displayed on the side of the tank indicating the level of water.

“We’re trying to get enough money to take care of, paint and clean the tanks, inside and out,” Mayor Chris Tyree said. “The largest bulk of it is the water tanks.”

The town held a public meeting Monday, July 1, just before the monthly town meeting, for citizens to add any concerns for the submission of the grant. There being none, proceedings will continue. The next step is for the engineer to get specifications and quotes together. Once this is complete, the town will have a special called meeting on Monday, July 15, at 6 p.m. to formally submit the grant application to NACOLG, who will forward it on to ADECA by the July 22, deadline. If awarded, the grant will be presented possibly in October.

A resolution was adopted at the July 1, meeting authorizing Goodwyn, Mills and Cawood, Inc. to provide the engineering services.

“We’re required to have these (meetings) in case the public wants to show up and voice any kind of needs they feel the town has,” Boyd said.

The family of former mayor Allan Brent Harbison approached the town during the June monthly meeting and asked if the ball fields at Hamner Park could be named in honor of Harbison. At the July 1, meeting, Devin Guthrie made a motion to name them the Alan B. Harbison Memorial Fields. Bobby Smith seconded, and the motion carried. A proclamation was signed after the meeting. The family will be adding a memorial at the ball fields at a later date.

“He had a lot to do with building the park and ball fields,” Town Clerk Tammi Farley explained. “We wouldn’t have it without him.”