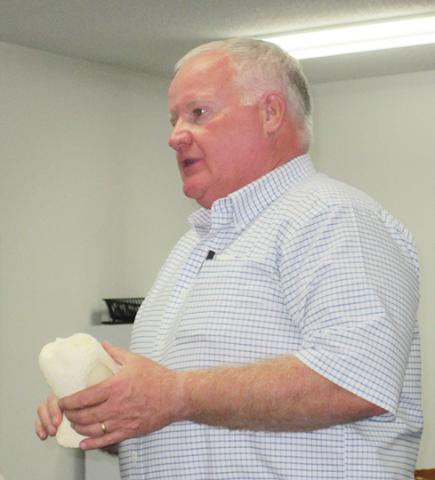 Engineer Calvin Cassady shows the end result of a chemical grout injection, which was used at the manhole near Lion’s Pride to keep groundwater from flowing into the sewer.

HALEYVILLE - In 2011, equipment was purchased by the Haleyville Water and Sewer Board to do work at the airport. Since that time, the equipment has not been used and deemed surplus at the water and sewer board meeting on Tuesday, July 23. A proposal to sell the equipment to the City of Haleyville was approved in the amount of $53,750, the majority being a 2011 John Deere 5093E Limited tractor 4x4 pre-emissions with loader for $40,000.

Other pieces of equipment were listed as follows: bucket and pallet forks for the loader, $2,000; 2011 John Deere MX15 Rotary Cutter, $7,000; eight foot rotary tiller for $1,750; four foot bush hog rotary tiller for $1,000 to be used in the parks and recreation department and a six foot John Deere heavy duty brush cutter for $2,000.

“Since we’re not going to be doing the airport land application any more, we’ve offered it to the city, and they would like to have it,” Lane Bates, general manager, said. All prices were quoted from a John Deere representative, Bates mentioned. The tractor has approximately 700 hours on it.

A motion was made, seconded and passed to sell this equipment to the city. Three other items the department has for sale the city was not interested in and was declared as surplus for selling at a later date.

A question was asked of Bates about the new water meters and the loss of water.

“I’m hoping in the fall everybody’s (meters) will be done and settled,” Bates replied. “I’m looking for extra revenue on the meters. We always lose water every month. We always range from 15 to 20 (percent). That’s still a good number, but it could always be improved,” he said. The new meters will help with the water loss, according to Bates.

Engineer Calvin Cassady informed the board members of a chemical grout, manufactured by Avanti, which had been injected into the ground to help control the groundwater and for soil stabilization at the manhole located near the Lion’s Pride.

“We drilled  holes in the side of the concrete and pumped this chemical in...it seals the back side of the manhole,” Cassady said. He explained it works similar to the foam seal bought at retail stores.

“But it’s different in the fact that it works in water, whereas the stuff you buy and spray in the wall won’t hold up,” he explained. “The wetter it is, the longer the survival rate is. They’re giving a 50-year warranty on it.”

This injection process is to stop the leaking of groundwater into the sewer system, causing additional work to rectify the problem.

Before the water board meeting, a public hearing was held involving the state revolving fund loan for 2019. A list was given to the public showing project cost estimates for improvements to lift stations 11 (behind the golf course at the country club) and 12 (in Blake’s Curve on Newburg Road), as well as the sewer project on Newburg Road and a belt press. This meeting was for the public to give comments on the project. None were given. The total estimated cost, including engineering fees, is $1,182,100.

“We filed a $60,000 insurance claim,” Thrasher said. A quote was submitted to Alabama Municipal Insurance Corporation and approved by them, minus a $1,000 deductible.

“There are alarms on it,” Bates said. “The backup pump kicked on (when the pump was struck by lightning), and we replaced both pumps.”

The affected pumps are at the Manasco pump station on Newburg Road.

In addition to reviewing finances, minutes of the previous meeting were passed. The meeting adjourned until next month on Tuesday, Aug. 27, at 7 p.m. at the warehouse building on 20th Street.