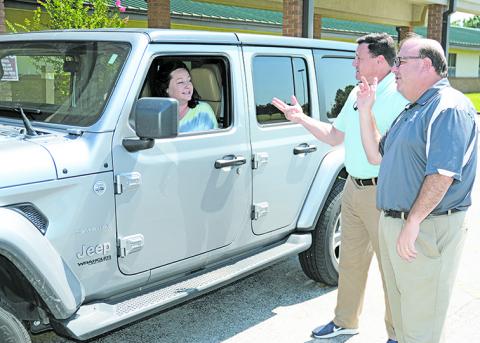 Administrators talk about the parking and drop off situations at their schools, going into effect when school starts Thursday, Aug. 8. Elementary Principal Christy Bice is showing where to pull up in order to drop off. Also shown are High School Principal Davey Reed, center, and Middle School Principal Bo Wilcoxson.

HALEYVILLE  - As a new school year starts for Haleyville City Schools on Thursday, Aug. 8, the community needs to be reminded of parking situations, drop-off locations and schedules, in order to keep the traffic flowing smoothly, especially during the first few days of school.
“We always try to tell people to get here in plenty of time those first couple of days because we have more parents who drop off the first week than we typically do throughout the  year,” stated Elementary Principal Christy Bice.
In order to reduce congestion, school officials ask parents to drop off their students in the regular drop-off line beginning the first day of school, Bice said.
The school provides a separate opportunity for all students pre-school through fifth grade to come to school, meet their teacher and drop off school supplies before school starts.
Pre-school and kindergarten will come  on Monday, Aug. 5 at 5:30 p.m., with first through fifth grade doing so on Tuesday, Aug. 6, from 4-6 p.m.
“That way, they don’t have a ton of supplies to bring in that first day,” said Bice.
“They have already met their teacher. They know where their classroom is. It makes the first couple of days much easier on the kids when we don’t have so many extra people in the building during the morning hours,” she said.
The biggest concern at the elementary school is student safety. “When you have almost 800 kids in a building and you multiply that times parents, it can be difficult to manage,” Bice said. “We want to put student safety first.”
The elementary school allows kindergarten students to be walked to class the first day. The first day of school will be girls only with boys coming the second day.  Parents or guardians are welcomed to walk those students to class those two days, Bice noted.
When both kindergarten boys and girls attend together on Monday, Aug. 12, parents will be expected to drop off their students at the curb at the front of the school, Bice explained.
“We’ll have plenty of people on the inside to make sure kids get where they need to go,” said Bice. “We’ll take good care of them, so they have nothing to worry about.
“We feel like that’s important every single day,“  said Bice. “We want our kids to know we want them here, and this is a safe place. We want every kid to start the day with a smiling face and a hug, someone telling them, ‘Hey, we’re glad you’re here.’”
Staff even greet students as they arrive, opening vehicle doors and helping them out. The middle school also provides staff to monitor the crosswalk between the schools in the morning, Bice said.
Typically, parents dropping off children in grades kindergarten through 2nd grade will drive down 20th Street, turn  across from the high school and drive around to the door closest to City Lake.
Parents dropping off older children, grades 3-5, will turn into the parking lot entrance on 20th Avenue across from the middle school and drop off on the middle school side, Bice further explained.
Bice urged parents or guardians to be at the school between 7:45 -8 a.m. “We allow drop offs beginning at 7:20 a.m.,” she said. “That’s for the entire year, so at 7:20 a.m., students can either go the gyms, where they are supervised, or they can go to the lunchroom for breakfast.”
The elementary school now has two pre-school units, which follow a different routine.  Pre-school only uses a side entrance on the City Lake side of the building to drop off students, Bice said.
Every morning, both front entrance doors to the elementary school will be open for drop offs. At 8 a.m., the right door will be closed and locked with the only access being the left door through a buzz-in system.

The middle school is reminding the public that this will be the second year of a new drop-off arrangement in their parking lot, where the parking lot will actually be divided, allowing for two drop-off locations.
“We have our parking lot divided into two sections,” said Middle School Principal Bo Wilcoxson. “You cannot get access to both sections using one entrance.”
Parents will have the option of dropping off their child at the middle school entrance facing the elementary school, which they can access by 20th Avenue, which runs between the middle and elementary school.
“You exit and enter at the same place,” said Wilcoxson. Parents enter at that drive to the entrance facing the elementary school, circle back through the parking lot and exit onto 20th Avenue.
Cones will be set up as barriers so parents using this route cannot get into the section of the parking lot facing the high school stadium track, Wilcoxson indicated.
Parents dropping off students on the side of the middle school facing the football stadium can enter the parking lot from 20th Street across from the football stadium, drive to the door on that side of the building, loop around and come back out onto 20th Street, Wilcoxson further explained.
“We started this at the beginning of school last year,” he said. “We had issues where  cars were cutting through our parking lot after dropping children off, and it just got dangerous.
“We want to make sure our students can get to school safely and leave school safely, so the cones have been a big help,” Wilcoxson added.
“This is one of the most exciting times of the year, school. We have teachers stationed throughout our school, and that is for safety as well.”
Teachers will be at both drop-off doors greeting students and making sure students get safely to their classes, Wilcoxson said.
Each day, regardless of the start of school, students assemble at the gym until about 7:25 a.m. when they dismiss students for breakfast, Wilcoxson said.
The first day at the middle school will recognize the newcomers on campus, the sixth grade students, who will walk in a path cleared by fellow students who will be cheering and giving them high fives, as they are celebrated as new members of the middle school family.

High School Principal Davey Reed noted that since not all students will be driving age, the younger students will be dropped off by parents or guardians at the front entrance to the school.
Students driving to school are encouraged to park in the front parking lot. Buses will drop off students in the lower parking lot near the central office below the band hall.
The senior parking lot is at the side of the school near the field house, Reed said.
“We have a lot of new drivers over the summer and I want to point out, it’s a no-phone zone for student drivers,” Reed pointed out. “We ask that they not use phones.”
The first day at the high school will be filled with some fun and exciting activities, Reed said.
Class schedules will resume as normal on Friday, Aug. 9, he noted.