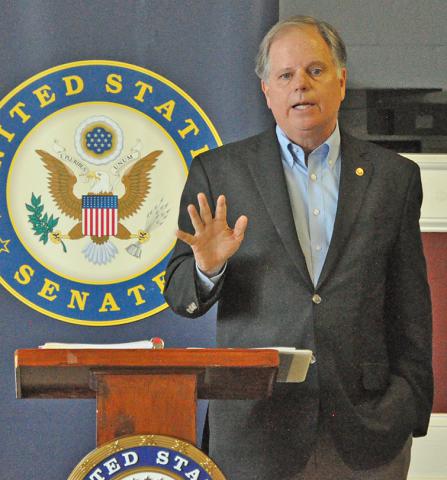 Doug Jones addresses a crowd during his recent town hall meeting in Hamilton.

HAMILTON - U.S. Sen. Doug Jones hosted a town hall meeting in Hamilton on Monday, Aug. 5.
The two-hour meeting took place at the Hamilton Police Department, with roughly 60 people in attendance.
Jones said the Senate is currently on recess until the week after Labor Day. Recess is a busy time for members of Congress, Jones said, adding that the day following the Hamilton town hall meeting, he was scheduled to host a meeting in Decatur then meet with officials with the new Toyota-Mazda plant in Huntsville.
On Aug. 7, Jones planed to visit the United Launch Alliance plant in Decatur and tour the Space & Missile Defense Symposium in Huntsville. On Aug. 8, Jones and his wife were scheduled to join fellow U.S. Senator for Alabama, Richard Shelby and his wife on a trip.
Jones was elected during the December, 2017 special election and seated in January, 2018 to finish the term of the state’s junior senator, Jeff Sessions, who vacated the office to accept the position of U.S. Attorney General for President Donald Trump.
Sessions was elected to a six-year term in 2014, meaning the seat is up for re-election during the presidential election in 2020.
Jones was the first Democrat in a quarter-century to win a Senate seat in Alabama. He ran against controversial Republican candidate Roy Moore, who recently announced he was running for the seat again.
Jones only secured 19 percent of the vote in Marion County during the 2017 election, while Moore was given 79 percent.
Despite this fact, Jones secured the Senate seat with the majority vote statewide. He was given 49.9 percent, while Moore had 48.4 percent. The other 1.7 percent went to write-in candidates.
“It’s been a fascinating year, folks, I have really enjoyed being up there (Washington, D.C.) and I can’t tell you how proud I am every day to be a U.S. senator for this state,” Jones said.
“It means a lot to have a voice. Because of the (2017 special) election here in Alabama that caught so much national publicity, I got into the Senate with a voice that people on both sides of the aisle listen to.”
Jones said the hardest part about being a senator is the schedule.
“I can’t do everything I want to do,” Jones said. “I can’t be in Hamilton and still be in Double Springs or in south Alabama.”
The Alabama senator said the second hardest part of his job is how difficult it is to get bills to the floor of the Senate.
“The senate doesn’t operate like it did when Judge (Howell Heflin) was there,” Jones said.
Jones began his career working as staff counsel to the U.S. Senate Judiciary Committee for late Alabama Sen.Heflin.
“There’s no real floor debates. The Senate is supposed to be this wonderful deliberative body and we don’t do that as much--that’s really frustrating,” Jones said.
“There’s a lot of work that goes on. And I’ll tell you, there is a lot of bipartisan work that you don’t see and I wish you did see.”
Just in this year’s Congress, Jones has co-sponsored well over 200 bills. He is an “original co-sponsor” on about 15-16.
Jones said 80-85 percent of those bills are bipartisan legislation.
“In the Senate, we really work hard with other staffs to try and come up with some legislation that will help people across the country and do it in a bipartisan way,” Jones said.
The senator said there is a large amount of “Noah’s Ark” legislation in the Senate, which pairs one Republican and one Democrat to a bill.
“So many of the bills that are introduced in the Senate, you will find, have one Democrat for every Republican,” Jones said.

The Alabama senator is currently serving on three Senate committees--Banking, Housing and Urban Affairs;  Health, Education, Labor and Pensions and the Committee on Armed Services.
“I specifically requested to get on these committees because I think they are the most important for Alabama,” Jones said.
Jones said he has been able to do interesting work in the banking committee, explaining he helped push a banking reform bill to help roll back Dodd-Frank rules and regulations.
He said the changes will help strengthen middle-sized banks and credit unions.
The Alabama Credit Union Association awarded Jones with the Legislator of the Year award  in 2018.
“As a freshman senator, I was really proud of that,” Jones said.
Jones said he is working on a bill with Sen. Tom Cotton (R-Ark.) to update money laundering laws.
“We are in such a global economy that money laundering is a big, big issue,” Jones said.
Jones said the Health, Education, Labor and Pensions committee works well together and is led by Chairman Lamar Alexander (R-Tenn.) and Ranking Member Patty Murray (D-Wash.).
Both committee leaders are sponsoring a large piece of legislation to reduce drug costs and pushing to stop surprise billing that can be added on to visits to emergency rooms that are out-of-network, Jones said.
“It’s a big bill, a bipartisan bill. It passed 25-2, or something like that,” Jones said. “Drug prices have spiraled out of control in the last 10-15 years. This will get generic drugs to market quicker and give more transparency on costs.”
Jones said he wants to push further in the committee, as he believes Medicare should be allowed to negotiate drug prices, just as Medicaid is currently doing.
On the education side of the committee, Jones said members are working to reauthorize the Higher Education Act of 1965, which intended to strengthen education resources and provide financial assistance for students.
“Hopefully, this means expanding the number of Pell Grants and simplifying the financial aid package,” Jones said, explaining the Free Application for Federal Student Aid  form is complicated at 14 pages long.
Jones said he is working with Alexander to try and streamline FAFSA and reduce it down to about 20-25 questions.
“I have seen statistics where about half of the people in Alabama just give up on this (FAFSA). They don’t fill it out.  They are leaving money on the table because that form is too complicated,” Jones said.